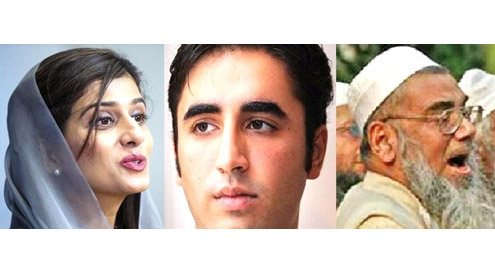 According to Bangladeshi daily newspaper the Amader Orthoneeti [Our Economy], eminent Islamic scholar and leader of the Islami Oikya Jote [Islamic Unity Movement] Mufti Fazlul Huq Amini, commenting on allegation of adultery of Hina and Bilawal told the daily, “If this report is true, it cannot be accepted under the Islamic laws. If Bilawal Bhutto is truly a bisexual and alcoholic; he does not have right to become the head of the state of any Muslim nation. The laws in Pakistan, does not permit such illicit activities.”

He said, punishment of adultery under Islamic code is stoning to death or whipping. Hina Rabbani Khar and Bilawal Bhutto Zardari now must stand for trial under the Islamic law, if they are found guilty.Mizbahur Rahman, Islamic scholar and politician commenting on allegation of adultery between Hina Rabbani Khar and Bilawal Bhutto Zardari said Islam forbids adultery and extra-marital relations.”This is a severe offense under the Islamic laws. Bilawal Bhutto is a criminal in the eyes of Islamic law and such people can never be allowed to continue as a leader or head of the state in any Muslim nation”, he said.

It may be mentioned here that, constitutionally Pakistan is an Islamic republic, where Islamic laws must be strictly applied to any such cases of adultery irrespective of the social or otherwise positions of the committers.In another report, the Amader Orthoneeti in another report, quoting a Pakistani online newspaper said, some people in Pakistan are raising demand for declaring Weekly Blitz as ‘enemy of Pakistan’ for publishing “false rumors” against the “esteemed leaders of the Islamic country”.

Adultery [also called philandery, anglicised from Latin adulterium] is voluntary sexual intercourse between a married person and someone other than the lawful spouse. Religious and legal interpretations of what constitutes adultery vary widely. The term adultery has an Abrahamic origin, though the concept predates Judaism and is found in many other societies. The definition and consequences vary between religions, cultures, and legal jurisdictions, but the concept is similar in Judaism, Christianity, Hinduism and Islam. Historically, adultery has been considered to be a serious offense by many cultures.

Adultery is considered by Christians to be immoral and a sin. Adultery in traditional Judaism applies equally to both parties, but depends on the marital status of the woman [Lev. 20:10]. Though the Torah prescribes the death penalty for adultery, the legal procedural requirements were very exacting and required the testimony of two eye-witnesses of good character for conviction. The defendant also must have been warned immediately before performing the act. A death sentence could be issued only during the period when the Holy Temple stood, and only so long as the Supreme Torah Court convened in its chamber within the Temple complex.

At the civil level, however, Jewish law [halakha] forbids a man to continue living with an adulterous wife, and he is obliged to divorce her. Also, an adulteress is not permitted to marry the adulterer, but, to avoid any doubt as to her status as being free to marry another or that of her children, many authorities say he must give her a divorce as if they were married.According to Judaism, the Seven laws of Noah apply to all of humankind; these laws prohibit adultery with another man’s wife.

Under Muslim law, adultery in general is sexual intercourse by a person (whether man or woman) with someone to whom they are not married. Adultery is a violation of the marital contract and one of the major sins condemned by Allah in the Quran:Qur’anic verses prohibiting adultery include:”Do not go near to adultery. Surely it is a shameful deed and evil, opening roads [to other evils].” [Quran 17:32]”Say, ‘Verily, my Lord has prohibited the shameful deeds, be it open or secret, sins and trespasses against the truth and reason.”‘ [Quran 7:33]

Punishments are reserved to the legal authorities and false accusations are to be punished severely. It has been said that these legal procedural requirements were instituted to protect women from slander and false accusations: i.e. four witnesses of good character are required for conviction, who were present at that time and saw the deed taking place; and if they saw it they were not of good moral character, as they were looking at naked adults; thus no one can get convicted of adultery unless they both themselves agree and give their confession under oath four times.

A survey conducted by the Pew Research Centre found relatively widespread popular support for stoning as a punishment for adultery among Muslims in Egypt (82% of respondents in favor of the punishment), Jordan [70% in favor], Indonesia [42% in favor], Pakistan [82% favor] and Nigeria ]56% in favor].

In some East Asian countries or regions, including North Korea, South Korea and Taiwan, adultery continues to be a crime. In the Philippines, adultery (defined as consensual sexual intercourse between a married woman and a man who is not her husband) and a related act of concubinage [a man cohabiting with a woman who is not his wife], are considered crimes under the Revised Penal Code of the Philippines. Adultery is not a crime in mainland China, but constitutes grounds for divorce.

In Pakistan, adultery is a crime under the Hudood Ordinance. The Ordinance sets a maximum penalty of death, although only imprisonment and corporal punishment have ever actually been imposed. The Ordinance has been particularly controversial because it requires a woman making an accusation of rape to provide extremely strong evidence to avoid being charged with adultery herself.

A conviction for rape is only possible with evidence from no fewer than four witnesses. In recent years high-profile rape cases in Pakistan have given the Ordinance more exposure than similar laws in other countries. Similar laws exist in some other Muslim countries, such as Saudi Arabia. – Weeklyblitz