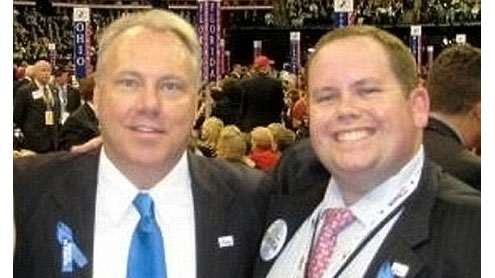 A Republican whistle blower testified he saw a golf cart full of what he presumed were prostitutes being wheeled into a GOP fund-raiser during a 2008 convention.

Former Florida GOP Delmar Johnson testified against chairman Jim Greer, who is on trial for theft and fraud after he was accused of stealing money from the state party.Johnson is the state’s star witness in the trial and gave a video-recorded deposition in June which was recently obtained by The Orlando Sentinel.He said the cart full of women was being wheeled into a party fund-raiser in the Bahamas in 2008.

According to the Sentinel, the 33-year-old called Greer ‘dictatorial’ and said he blind-sided him in early 2009 when he proposed creating Victory Strategies LLC, the company that prosecutors say Greer and Johnson used to steal money from the state party.Greer has insisted he has done nothing illegal. He claims the company earned legitimate fund-raising commissions.However prosecutors charge that Greer set the company up in secret to funnel $125,000 of party money into his personal bank accounts.

As well as revelations about how the money was spent and how it was covered up, Johnson talked about the Bahamas fundraiser where major party donors and prominent Florida Republicans were in attendance.In his deposition, Johnson said: ‘I specifically saw a golf cart with young ladies drive by, the extent of why they were there I did not specifically know. But I could presume they were prostitutes.’He identified a number of prominent Republicans in attendance, including Tallahassee lobbyist Brian Ballard.

He told the Sentinel on Friday that he and around 100 other people were there but they knew nothing about guests spending time with prostitutes and said it was ‘ridiculous and disgusting’ that the people who attended were thrown into a ‘scandalous lie’.Johnson, who owned a 40 per cent share of Victory Strategies, was not charged in the case because he struck a deal with prosecutors which required him to testify against Greer and repay $65,000.

Greer promoted Johnson to be executive director of the Florida Republican Party in January 2009.Greer, 50, of Oviedo, is charged with four counts of theft plus fraud and money laundering. He is pleading not guilty.His trial has been pushed back to February after being set for November while his defense attorney haggles with GOP attorneys over party emails.Some of the most prominent Florida Republicans are named as witnesses for Greer’s trial. – Dailymail