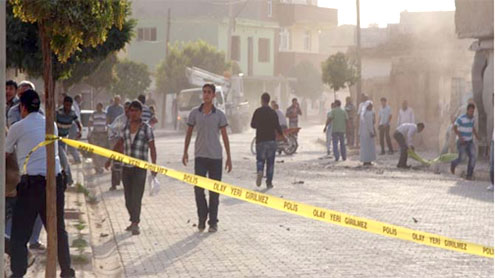 UNITED NATIONS: Turkey demanded that the UN Security Council take action against Damascus on Wednesday after a volley of Syrian shells crashed over its border and killed five Turkish women and children.

Turkish artillery fired a retaliatory salvo back at Syrian targets, marking a sharp escalation in the crisis between the neighbors, while Ankara’s envoys sought support from Nato and the United Nations.The cross-border shelling hit the Turkish town of Akcakale and was the first to kill Turkish civilians, making this the most serious clash since June, when Syria shot down a Turkish fighter jet and killed both its crewmen.

“This is an act of aggression by Syria against Turkey,” Ankara’s UN Ambassador Ertugrul Apakan said in a letter to Guatemalan Ambassador Gert Rosenthal, who heads the rotating presidency of the 15-nation council.“It constitutes a flagrant violation of international law as well as a breach of international peace and security.Turkey calls for an immediate end to such unacceptable violations.”

Diplomats at the United Nations said the council was expected to approve a text that condemned the shelling in “the strongest terms” and urged Syria “to respect the sovereignty and territorial integrity of its neighbors.”“Such violations of international law constitute a serious threat to international peace and security. The members of the Council demand that such violations stop immediately,” the draft under discussion reads.Most of the members of the Security Council were ready to support the statement, but Syria’s ally Russia asked that its release be delayed until Thursday while its diplomats consult with Moscow.

Earlier, Turkey had already consulted its Nato military allies and won a strong statement of support.“The alliance continues to stand by Turkey and demands the immediate cessation of such aggressive acts against an ally and urges the Syrian regime to end flagrant violations of international law,” a Nato statement said.The transatlantic alliance said Syria’s “recent aggressive acts at Nato’s southeastern border marked a “flagrant breach of international law.”The most powerful Nato ally, the United States, was quick to condemn Syria’s aggression. The Pentagon dubbed the attack “depraved” and said it underlined the need for strongman Bashar al-Assad to step down.

Turkey has never been shy about mounting cross-border incursions and shelling of its own when pursuing Kurdish rebels in neighboring Iraq, and has angered Syria by hosting rebels opposed to Assad’s regime.In recent months, Ankara has reportedly considered military intervention in order to secure a safe humanitarian area for Syrian refugees fleeing the fighting in a 19-month-old civil war that has left 31,000 dead.But moves to agree on a joint international response to the crisis in the form of a UN Security Council resolution have stalled, after permanent members China and Russia imposed their veto on three Western-backed motions.

Turkish Foreign Minister Ahmet Davutoglu expressed Turkey’s “deepest concern” to UN chief Ban Ki-moon and also briefed Lakhdar Brahimi, the United Nations and Arab League peace envoy to Libya.Ban encouraged Davutoglu to “keep open all channels of communication with the Syrian authorities with a view to lessening any tension that could build up as a result of the incident,” spokesman Martin Nesirky said.

The UN chief also urged Damascus to “respect fully the territorial integrity of its neighbors as well as to end the violence against the Syrian people,” Nesirky said.“He calls on all parties to reduce tensions and to forge a path toward a peaceful resolution of the Syria crisis.”Since late July, Syrian rebels have seized control of at least three key border crossings with Turkey and others on the eastern border with Iraq. – Dawn