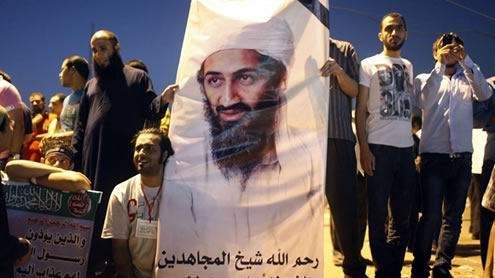 A movie detailing the raid that killed al-Qaeda former leader Osama bin Laden will be aired by the National Geographic Channel on Nov. 4 — two days before the U.S. Election Day –, the CNN announced on Thursday.

Titled “SEAL Team Six: The Raid on Osama bin Laden”, the film is being distributed by the Weinstein Company, owned by a Harvey Weinstein, a major backer of President Barack Obama’s re-election campaign. The New York Times reported that the movie will also stream on Netflix starting on Nov. 5.

The feature-length film will chronicle the raid in Pakistan, an event that President Barack Obama’s campaign touts as one of his main achievements. Some may speculate the TV movie could portray the president in a positive image and have an impact on voters just two days before they head to the polls. However, the New York Times quoted a National Geographic Channel executive as saying that politics was not a factor in the timing.

Howard T. Owens, the channel’s president, said Nov. 4 was selected “to take advantage of our fall schedule” of shows, which will have their premieres in the days and weeks after the movie. “Other than being commercially opportunistic, we weren’t considering the election,” Mr. Owens was quoted as saying. He described the movie as “incredibly well-made.” According to the New York Times, National Geographic said Thursday that the film mostly sticks to the facts about the raid, though “some aspects of the characterizations have been dramatized for creative reasons.” It said the sequences in the film were “vetted by a team of experts including a recently retired Navy Seal, a top CIA operative and one of the most renowned bin Laden historians.”

“Seal Team Six” was produced by Nicolas Chartier, who previously partnered with Mr. Boal and Ms. Bigelow on the Oscar-winning film “The Hurt Locker.” The director was John Stockwell, who previously directed “Into The Blue” and “Crazy/Beautiful.” “We all know now the ultimate outcome of the President’s decision to green light the mission. But what was fascinating to me were all the potentially disastrous outcomes of the decision to give the go ahead to the raid that the movie highlights. It hopefully gets inside the challenges of making a decision that could have derailed a presidency,” director Stockwell said in a statement Thursday night. – Alarabiya

From Russia with Love