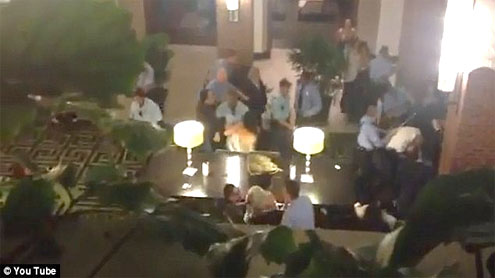 Two brides had their special day ruined when their wedding guests got into a massive, booze-fueled brawl as two dueling wedding receptions clashed.

The fight turned deadly when one bride’s 57-year-old uncle died from a heart attack outside the Sheraton Mission Hill hotel in Philadelphia.The fracas was recorded on video by an irate guest, whose hotel stay was disturbed by the 2am commotion on Sunday.Philadelphia police can be seen charging into the reception with nightsticks and pulling fighting wedding guests off each other. Three people were arrested. ‘Did they just deck the bride?’ the man behind the camera asks at one point.

Amid the ruckus, the Philadelphia Daily News reports, a 57-year-old man – said to be the uncle of one of the brides – was found unconscious outside the wedding.He was taken to the hospital, where he was pronounced dead from a heart attack less than an hour later.Police say that two wedding receptions were taking place at the hotel and a fight broke out near the bar.It is unknown what, exactly, caused the fight in the City of Brotherly Love, though the man recording the video was not amused.

‘It’s my frickin’ birthday, go to bed!’ he says. Women can be heard screaming as men shove each other around near the wedding party table. Suddenly, police arrive on the scene and they begin grabbing unruly guests.Two were cite for disorderly conduct. Other was arrested for assaulting an officer.’There was an issue with a lot of alcohol fueling the fight,’ police Lt. Ray Evers told the Daily News.Contrary to the poster’s assertion, the video does not appear to show that one of the brides was punched.A woman in a wedding dress can be seen standing outside the fray. – Dailymail