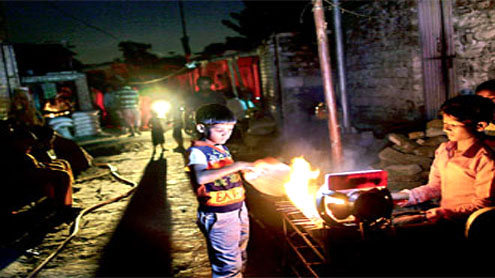 An Indian initiative is lighting up Prime Minister Manmohan Singh’s birthplace in Pakistan as part of a little publicised project aimed at energy cooperation, including tapping alterative sources of energy, in the subcontinent.

The Energy and Resources Institute (TERI) has set up two power micro-grids in Chak 313 village of Pakistan’s Sahiwal district as part of the initiative.TERI chief R. K. Pachauri told mediapersons here that the institute will also provide additional solar water heaters and two desktop computers at Gah village, Prime Minister Manmohan Singh’s birthplace, in Chakwal district as part of its ‘Lighting a Million Lives’ campaign, which has provided electricity to over 380,000 households in rural India.“We are essentially providing technical support to boost energy security in Gah.

We have connected several houses through smart grids and have set up 51 solar-based domestic lighting systems in the village since 2006. TERI has also installed 16 solar street lighting systems and and solar heaters in all the three mosques of the village,” said Ibrahim Hafiz Rehman, director, social transformation division, TERI.“Pakistan is currently in the throes of a serious power problem, with many villages deprived of energy,” Pachauri said on Friday.

He said a series of events over Oct 12-13 in Pakistan designed to boost bilateral ties included “a high-level conference on energy access in Islamabad on Oct 12 and a meeting and briefing with Pakistan President Asif Ali Zardari.”The events are being organised by TERI in collaboration with Pakistan-based organisations LEAD, Buksh Foundation, and state-run Alternative Energy Development Board (AEDB).

He said though the cost of the projects has been around Rs.100,000, the expenses could not be compared to the goodwill and warmth in Pakistan generated by the projects.The Pakistan events conclude with a benefit concert on Oct 13 in Lahore, where Indian rock band Euphoria and Pakistani band Junoon will perform. – Khaleejnews