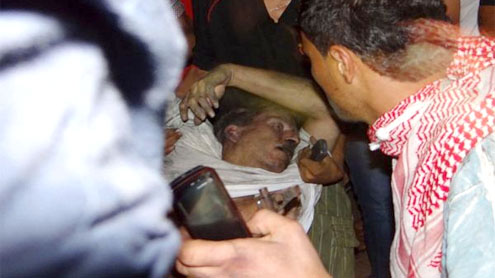 The fatal attack on a U.S. diplomatic compound in Libya last month has become a test of Secretary of State Hillary Rodham Clinton’s leadership and a threat to her much-admired legacy as America’s top diplomat just a few months before she plans to step down.

Clinton was among the first Obama administration officials to publicly condemn the attack and mourn the deaths of Ambassador J. Christopher Stevens and three other Americans. But as the State Department has weathered Republican-led criticism that it misread warning signs before the Sept. 11 attack, Clinton has been far less visible.

Clinton will not appear at a Wednesday oversight hearing on the Libya attack, where House Republicans have said they will question the State Department’s security preparations and the administration’s account of the attack. The State Department will instead send a trusted career diplomat along with three security officials.Ahead of the hearing, State Department officials provided new details about the attack while asserting that there had been no way to predict or prevent the sustained assault.

“The lethality and the number of armed people is unprecedented. There had been no attack like that anywhere in Libya — Tripoli, Benghazi or elsewhere — in the time we had been there,” said one official who spoke on the condition of anonymity to discuss events still being investigated. “It would be very, very hard to find a precedent for an attack like that in recent diplomatic history.”But the new details also appeared to confirm that there was no protest or other benign gathering outside the compound gates, as initially described by some in the administration.

A month before the presidential election, with Mitt Romney surging in the polls, Republicans increasingly see the Libya attack as a political vulnerability for President Obama. Republicans accuse Obama and top administration officials of overlooking warning signs before the attack and trying to deflect questions about terrorism afterward.

“There was a clear disconnect between what security officials on the ground felt they needed and what officials in Washington would approve,” Rep. Darrell Issa (R-Calif.), chairman of the House Oversight and Government Reform Committee, said Tuesday. “Reports that senior State Department officials told security personnel in Libya to not even make certain security requests are especially troubling.”

Clinton briefed members of Congress privately days after the attack and has called individual members frequently. She spoke to Issa on Monday, another senior State Department official said.“They did not ask, and there was no serious discussion at this point that she would testify,” the official said.

Clinton has made no public mention of the attack or investigation since Oct. 3. She has no public speaking events on her schedule this week. A trusted Clinton confidant who is the chief protector of her image is reviewing all media inquiries related to the attack.

“It did happen on her watch, so is the secretary responsible? The secretary is always responsible,” said P.J. Crowley, a former assistant secretary of state for public affairs under Clinton and now a professor at George Washington University. – WP