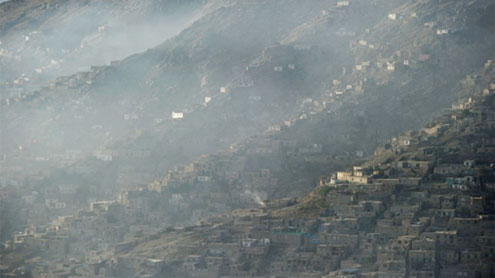 Wedged between the Hindu Kush mountain range and the river which shares its name, the bustling Afghanistan capital of Kabul is home to more than five million people.

Around 20 per cent, or one million, of those Kabulis live in the vertiginous hills surrounding the city. Perhaps tellingly, the same percentage (23 per cent) of the capital’s residents live below the poverty line.

While any other city in the world would put a huge price tag on properties that possess such a commanding view, nothing could be further from the truth in Kabul.Low-income housing has spread high into the hills and, while running water has been recently added to some of the luckier neighbourhoods, foul and disease-laden open sewers still run downhill through streets and putrid gutters.

In suburbs like Jamal Mina, home to construction worker Ahmad Tazim and his family, residents are almost literally on top of each other – living a hand-to-mouth existence made even wore brutal by the seemingly endless conflict in the country.

But life is to become even worse for Tazim and other construction workers like him – the booming construction industry is about to bust. And it’s not just disastrous news for the poor in the country: the emerging upper class in Kabul alsoface losing their new mansions and high-rise apartments in a much-feared economic freefall.According to the World Bank more than a third of the population of Afghanistan live below the poverty line, more than half are vulnerable and at serious risk of falling into poverty.

Despite this, a healthy injection of billions of dollars in foreign aid and reconstruction contracts have fuelled a roaring construction industry in Kabul for much of the past decade.The real-estate market – catering to not-only wealthy Kabulis but international organisations and foreign embassies – is not seeing the same demand it did ten years ago.Kabul realtor Abdul Sami Mirza told Radio Free Europe: ‘There are no buyers. They’ve all disappeared. The political situation is bad, so people don’t have the courage to buy. [Last year] the market was very good. But then the political situation badly affected those looking to buy or sell their homes. Many homeowners are going back overseas and leaving Afghanistan altogether.’

At the heart of these concerns is the fact that, in less than two years’ time, tens of thousands of Nato-led coalition forces will begin their withdrawal from the country.Uncertainty about the future security of the region, and the impending drought of foreign aid, has sparked a full-scale exodus by anyone who can afford to do so.Demand and housing has halved in wealthy neighborhoods, and the drying up of building jobs is causing increased heartache in the poorer neighbourhoods. – Dailymail