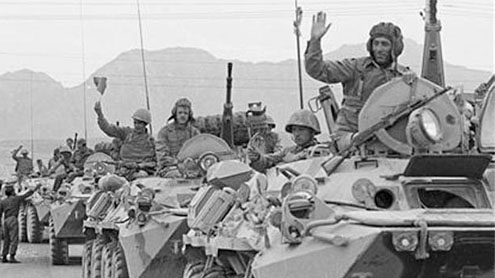 KABUL: Russia appealed Monday to the Afghan authorities and public to provide information on over 200 Soviet troops listed as missing since Soviet forces ended their occupation of Afghanistan in 1989, including 30 to 40 who may still be alive.

Russian ambassador Andrey Avetisyan said the two countries are preparing an agreement that would regulate future efforts to recover the servicemen, who went missing during a decade of guerrilla warfare in the impoverished nation.Difficulties remain, he noted, in accessing some areas believed to contain soldiers’ graves because of the current war between international forces, the Taliban and other insurgents.“We are talking about places where nobody goes, remote points where fighting is still heavy,” he told reporters.

The Soviet Union invaded Afghanistan on Dec 27, 1979, telling the world it aimed to transform Afghanistan into a modern socialist state. Moscow sought to prop up a communist regime facing a popular uprising, but left largely defeated on Feb 15, 1989 by anti-communist mujahideen forces receiving massive support from the United States, China, Saudi Arabia, Pakistan and others.The Soviets maintained a garrison of about 80,000 troops in Afghanistan through much of that war. Nearly 700,000 rotated through the country and about 15,000 died in the 10-year conflict.

A Russian veterans group says 265 soldiers remain unaccounted for. About 20 are thought to have resettled in other countries after they deserted, while 30 to 40 may still be in Afghanistan or Pakistan.One of those was Nikolai Bystrov, an army lieutenant captured by guerrillas fighting the Soviet occupation. He later became the personal bodyguard of Northern Alliance leader Ahmed Shah Massoud who battled the Taliban during the 1990s.

Aleksander Lavrentyev, deputy head of a veterans group searching for Soviet MIAs, said his group had received excellent help from Afghan authorities, the Red Crescent, NGOs and ordinary citizens, including those who had fought on the opposing side, in locating the remains of 15 soldiers in the past 4 years.Of those, five were positively identified while the rest were still undergoing forensic testing.“But now time is passing and it is becoming more and more difficult to find witnesses of those events,” he said.

The move to resolve the remaining MIA cases comes as the US-led Nato coalition is preparing to draw down its forces in Afghanistan and hand over responsibility for the war in 2014 to the Afghan security forces.Despite the presence of up to 140,000 foreign troops, Nato has not been able to defeat the guerrillas who have successfully regrouped after their crushing defeat by US-led forces in the aftermath of the Sept 11 attacks.Russia has backed the international coalition in the war, providing air and land transit routes for troops and equipment. But Moscow has been critical of the alliance’s plans to pull out while the Taliban remain undefeated. – Dawn