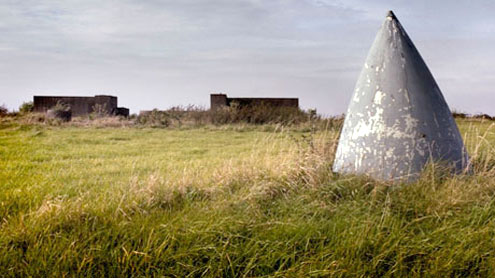 Remains of missile sites in Rutland and Northamptonshire, which were on 15-minute alert in 1962, get Grade II listing.

In memory of the dark days half a century ago when the world waited in dread to see if the nightmare of nuclear war was about to become reality, the government is listing the remains of two nuclear missile sites in Rutland and Northamptonshire. In October 1962 both were on 15-minute alert to fire on the Soviet Union – with the real risk of retaliation on Britain.In the Cuban missile crisis there was a 13-day standoff between the United States and the Soviet Union, when the US president, John F Kennedy, ordered the Soviet leader, Nikita Krushchev, to disarm the nuclear missiles he had placed in Cuba on threat of invasion.

It is ancient history to children and teenagers, but anyone in their mid-50s or older will remember the days when the world held its breath in what is regarded as the closest ever approach to nuclear war: in at least one Irish convent school the children were sent home at lunchtime on the day when many expected bombs could fall, so they would at least be with their families if the insanity of mutually assured destruction became fact.

The two bases being listed at Grade II are the former RAF North Luffenham in Rutland and RAF Harrington in Northamptonshire. They form part of a chain of cold war sites, some still covered by classified information, many only identified and listed in the past 10 years. The anniversary will also be marked by special events at the York Cold War Bunker, and the cold war tunnels under Dover Castle.

North Luffenham was built as a second world war airbase and selected in 1958 as a main Thor missile site. Harrington was under its command and was armed with Thor missiles in 1959. The missiles were 20 metres long and 2.5 metres in diameter, with a range of 1,500 nautical miles, and 60 were deployed at 20 sites in the east of England under the codename Project Emily. At each base there were specially adapted or newly built hangars to store the missiles, other equipment, fuel, and for maintenance and inspection, protected by earth banks, blast walls, satellite stations, and double wire fences. The missiles were British property, manned by RAF staff trained for the task by the US air force, but the actual nuclear warheads remained under US control.

The Thor missiles could be brought to operational readiness in 15 minutes after receiving the authenticated order to launch, and in October 1962 59 of the 60 missiles were made ready.The Cuban crisis fizzled out in a compromise, and the Thor missiles were phased out the following year. North Luffenham was the last of the bases to close as a nuclear site. It closed as an airbase in 1997 and reopened the following year as the St George’s Barracks of the Royal Anglian Regiment. At Harrington most of the buildings, runways and taxiways were demolished in the 1960s, though part of the western perimeter survives as a bridleway, and part of the original operations building is in use as the Carpetbagger Aviation Museum. – Guardian