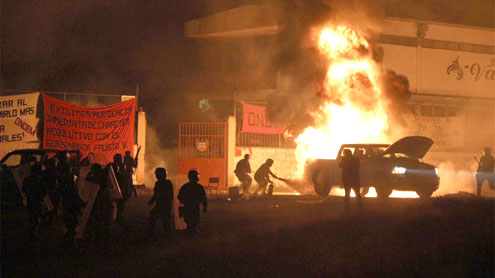 MEXICO CITY: Police raided three teachers colleges on Monday in the western state of Michoacan, where dozens of students had been hijacking buses and delivery trucks for a week to protest curriculum changes.

Masked protesters battled police with rocks and fireworks. Student involved in the campus takeovers burned a dozen trucks and buses before authorities swept in, detaining 176 strikers. Ten police officers were injured, three seriously, the Michoacan state government reported.The massive police raids early Monday indicate patience is running out with campus takeovers, which have become common and often violent in Mexico. In recent weeks, hundreds of students at two other occupied campuses in Mexico have battled protesters to free their universities from strikers.

The standoff at the teachers colleges began over a week ago, when students seized the campuses to protest plans to require them to take English and computer science courses. The protesters say the colleges are meant to prepare teachers for rural areas where basic skills are more of a priority.The protesting students fanned out, forcing bus and delivery truck drivers to move the vehicles to the occupied campuses. Protesters ended up holding the vehicles and several of their drivers for more than week. The governments said the hijackings caused losses of hundreds of thousands of dollars per day.

Michoacan state spokesman Elina Ambriz said one of the three campuses had been recovered without incident.It was the latest in a round of pushbacks against campus takeovers, which have long been tolerated in Mexico because authorities are often loath to interfere. Police are wary of entering many colleges because of the concept of university autonomy, which protects academic independence by allowing colleges to run their own affairs. Memories of student massacres in 1968 and 1971 make cracking down on campus protests politically unpalatable.

But with common citizens and other students being affected by the takeovers, police and even students themselves have begun to act.Last month, rejected students demanding admission to the University of Michoacan took over the campus. After two weeks without classes, dental and medical students donned motorcycle helmets, leaped the walls around the campus in white lab coats and battled to take their university back. Rocks and fists flew, sticks and baseball bats were swung, a fire extinguisher was turned against the medical students, and finally the squatters fled the school of medicine. Classes reopened days later.

This month, about 100 students at Mexico City’s Autonomous University rushed the gates of their seized campus and briefly forced out striking students, who later returned with a pickup truck to bash in the gates and retake the school. The two sides are now in talks to end the standoff.With only a dozen or so masked students holding some campuses at the school, frustration has boiled over among hundreds of locked-out students who tried to take make-up classes in improvised classrooms. The strikers were backed by some professors and university employees.

“We are now holding classes in tents, at the soccer field next to the campus, and the conditions are deplorable,” said Gustavo Martinon, 23, a media arts student at the university’s Cuautepec campus. “When it rains, the tents flood.””The engineering students need labs and computers, and they don’t have them. We (media arts) students need the radio station, the video facilities, and all the equipment we need.”Like most of the other students trying to take back the campus, Martinon said he has no position on whether the strikers have a legitimate grudge. Taking over a campus and affecting thousands of students, he said, isn’t the way to air a grievance.

“This has nothing to do with a student movement,” Martinon said. “The students are just caught in the middle.”The Mexico City strike was called to protest a crusading rector who wanted to clean up inefficiency and low graduation rates; only a few dozen of the university’s nearly 15,000 students have actually graduated in the 11 years since the university was founded. The rector’s proposals sparked opposition from professors and employees, and the protesters said they took over the campuses because of fraud in voting for the university’s administrative board, and said they have the support of a majority of students.

“Assemblies held by the students at the university’s five campuses decided to call a strike, because legal procedures had been violated and vote results ignored” in elections that gave the crusading rector a majority on the university council, said Javier Marmolejo, an anthropology professor and strike leader. He said the strike assemblies were often voice votes or raised hands. He didn’t explain why he, a professor, is helping lead a student strike.

Outside citizens also have been affected by students blocking highways or taking over toll booths. Many students struggle to get by, working part time to finance their studies, and face a tight job market. Some fear employers may steer clear of graduates from universities with a history of stoppages, strikes and confrontations.

“When I completed my undergraduate degree and went to look for a job, the first thing they said to me was ‘Where did you study?’ and when I said the University of Michoacan, they said, ‘Oh, gee, we don’t really have any positions open right now,'” said Erika Garduno, a 31-year-old graduate science student. “They tag you as a problematic person, a striker.”

Only about 20 percent of Mexican youths are expected to get some college education, but college graduates make up 35 percent or more of the unemployed. Unemployment for college-educated people in Mexico is higher than for high-school dropouts, in part, employers say, because universities graduate too many accountants, lawyers and doctors, instead of the careers the marketplace needs.

The medical students, not normally a radical bunch, led the take-back of the Michoacan campus late last month, in part because their school was at risk of losing its accreditation.”I think the kids in medical school were tired of putting all their effort into this and because of the acts of a few people, the medical school loses its accreditation,” said Victor Hugo Garduno, a professor of metallurgy, who has helped lead a new movement known as “No Mas Tomas” or “No More Takeovers.” – Yahoonews