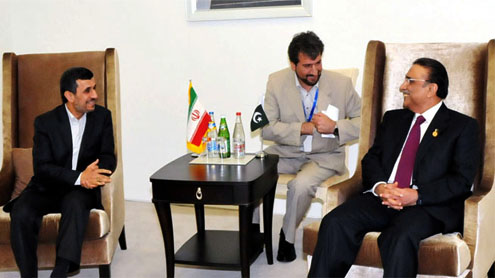 During a meeting between President Zardari and his Iranian counterpart Mahmoud Ahmadinejad on the sidelines of the 12th ECO summit, the two sides discussed bilateral, regional and international issues.From the Pakistani side, the meeting was also attended by Foreign Minister Hina Rabbani Khar, Senator Haji Mohammad Adeel, Inayatullah Kakar and Ambassador to Azerbaijan Alamgir Babar.

The president noted that relations with Iran were growing steadily and expressed a desire for more collaboration in trade and investment, energy and connectivity to bring the two peoples closer. He said greater interaction between the leadership and the two nations would not only strengthen historical, cultural and religious bonds but would also help them to benefit from each other’s resources and expertise.

President Zardari said there was a huge potential for trade between the two countries and called for concessions like preferential tariff and free trade arrangements to take the volume or bilateral trade to $10 billion.“The agreement on export of wheat and rice to Iran is a test case for our barter trade and if successful, it can be replicated in other areas.”President Zardari called for removing tariff and non-tariff barriers and identifying alternative arrangements to expand bilateral trade.

Issues related to visa facilitation and opening of new border posts at Mand-Pishin and Gabd-Rimdan to connect Karachi and Gwadar with Chah Bahar and Bandar Abbas through the Coastal Highway were also discussed. President Zardari said Pakistan was concerned over the deteriorating situation in Syria. “We believe that stability in this region is important for peace in the region and beyond.”He said Pakistan desired an immediate end to the bloodshed in Syria and would continue advocating principles of non-intervention and non-interference in the internal affairs of states.

The president said Pakistan supported independence, sovereignty and territorial integrity of Syria and that it would continue supporting any initiative which could provide political space to Syrian parties for bringing peace and stability in the country.Mr Zardari reiterated Pakistan’s stance to support an Afghan-led and Afghan-owned reconciliation process. – Dawn