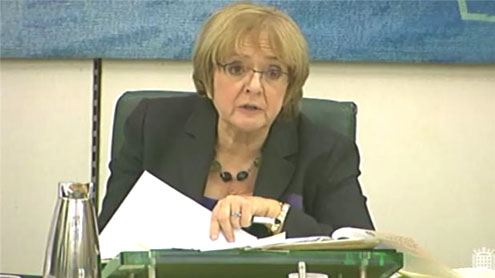 Executives from Google, Starbucks and Amazon revealed how they base operations offshore and route profits to tax havens.They had been summoned by MPs to explain why they contribute little or nothing to the Treasury’s coffers. In a three-hour inquisition:

The legal ruses deployed by the three US firms have caused outrage because ordinary taxpayers are left to make up the difference.Protest group UK Uncut yesterday vowed to take direct action on December 8 to try to shut down some of the nation’s 700 Starbucks outlets.Margaret Hodge, the Labour chairman of the public accounts committee that held yesterday’s session, told the executives before her: ‘We’re not accusing you of being illegal, we’re accusing you of being immoral.’

The MPs are probing the tax that HM Revenue and Customs takes from global corporations.
Google, which was accused of avoiding more than £200millon in tax last year by basing its operations in Ireland, admitted structuring its affairs to minimise its liability.But Matt Brittin, Google’s UK chief executive, said the search giant was right to pay the bulk of its taxes in the US because its crucial operations and technology teams were largely based there.

Asked to explain the Bermuda connection, he replied that the island housed the company’s intellectual property outside of America.Google reports the lion’s share of its non-US income through Ireland because of the low corporation tax rate there. Even then some money is sent to Bermuda where rates are even lower.Google paid only £6million to the Treasury last year on UK sales of £2.6billion.

Starbucks was strongly criticised for paying just £8.6million in tax in 14 years of trading in Britain. It paid none in 2011 on revenues of £398million.Troy Alstead, its chief finance officer, said the UK arm had not yet turned a profit and the parent company was ‘not at all pleased about our financial performance’.But MPs expressed surprise that a loss-making firm would be able to afford to keep opening stores.’You’re either running the business badly or there is a fiddle going on,’ said Labour’s Austin Mitchell.MPs were also angry that Starbucks in the UK pays a 4.7 per cent fee to the coffee giant’s Dutch arm for the right to use its branding and coffee recipe.

The fee, which has been as high as 6 per cent, reduces its UK tax bill.’You go for what you think you can get away with and you charge that,’ said Mrs Hodge. ‘You just look at the going rate in a jurisdiction and you charge that.’Mr Alstead said his firm had a deal with the Dutch government that gives Starbucks a special tax rate in Amsterdam.The terms of the bargain, he said, were ‘iron bound in confidentiality’, and he couldn’t reveal them in the open hearing. Mrs Hodge countered that it was a ‘sweetheart deal’.

Mr Alstead also revealed that the coffee, which is bought through Switzerland, never goes to the country despite having a 20 per cent mark-up slapped on it when being sold to other countries, such as the UK.Amazon said it used Luxembourg as a base for its European operations because of the favourable tax rate there.Andrew Cecil, the online retailer’s public policy director, said the Luxembourg business’s turnover in 2011 was £7.3billion yet it paid taxes of just £6.4million.It paid no UK tax in 2010 on revenues of £3.3billion.

MPs were furious that he refused to reveal how much the company made from its British arm.’It’s quite insulting to our intelligence that you claim you don’t know what sales you make in the UK,’ said Liberal Democrat MP Ian Swales, a member of the influential Commons committee.Mr Cecil claimed that Luxembourg, which employs around 500 people, was the real ‘engine’ of the business, rather than the UK, where it employs 15,000.Its profits are booked in Luxembourg, with the UK figuring only as a ‘service arm’. MPs said his answers were ‘evasive’ and ‘annoying’ and Margaret Hodge said the committee would call ‘a serious person’ for further questioning.She said Mr Cecil’s ignorance was ‘outrageous’ and that he had ‘been put up’ to it by the company. – Dailymail