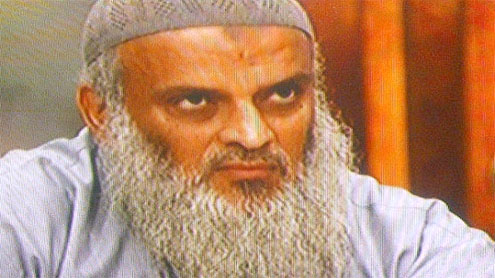 An Egyptian jihad leader, with self-professed links to the Taliban, called for the “destruction of the Sphinx and the Giza Pyramids in Egypt,” drawing ties between the Egyptian relics and Buddha statues, local media reported this week.

Murgan Salem al-Gohary, an Islamist leader twice-sentenced under former President Hosni Mubarak for advocating violence, called on Muslims to remove such “idols.”“All Muslims are charged with applying the teachings of Islam to remove such idols, as we did in Afghanistan when we destroyed the Buddha statues,” he said on Saturday during a television interview on an Egyptian private channel, widely watched by Egyptian and Arab audiences.

“God ordered Prophet Mohammed to destroy idols,” he added. “When I was with the Taliban we destroyed the statue of Buddha, something the government failed to do.”His comments came a day after thousands of ultraconservative Islamists gathered in Tahrir Square to call for the strict application of Sharia law in the new constitution.But in retaliation to Gohary’s remarks, the vice president of Tunisia’s Ennahda party, Sheikh Abdel Fattah Moro, called the live program and told Gohary that famous historic military commander Amr ibn al-Aas did not destroy statues when he conquered Egypt.

“So who are you to do it?” he wondered. “The Prophet destroyed the idols because people worshiped them, but the Sphinx and the Pyramids are not worshiped.”Gohary, 50, is well-known in Egypt for his advocacy of violence, Egypt Independent reported.“He was sentenced twice, one of the two sentences being life imprisonment. He subsequently fled Egypt to Afghanistan, where he was badly injured in the American invasion. In 2007, he traveled from Pakistan to Syria, which then handed him over to Egypt. After Mubarak’s fall in early 2011, he was released from prison by a judicial ruling,” the newspaper added.

In recent months, fears have surfaced that the ultra-conservative Salafi political powers may soon wish to debate new guidelines over Egyptian antiquities.Islamists have swept the recent presidential and parliamentary elections in the country’s post-revolutionary stage, with the Muslim Brotherhood and the ultra-conservative Salafi Islamists rising to political power.

“The fundamental Salafis have demanded to cover Pharaonic statues, because they regard them to be idols,” Egyptian author on ancient history Ahmed Osman told Al Arabiya English, explaining that Salafi Muslims follow conservative religious principles which view statues and sculptures as prohibited in Islam.“But so far the government has done nothing to indicate what is the future of Egyptian antiquities,” adds Osman.

Many hope that Egypt’s new President Mohammed Mursi will help usher better preservation of Egypt’s proud cultural heritage. Egyptian officials have recently announced the country will reveal more of its ancient buried treasures.The tomb of Queen Meresankh III, the granddaughter of Khufu, of Great Pyramid fame, is set to be opened to tourists later this year, with the last resting places of five high priests also slated to be put on show.Officials are also believed to be reopening the underground Serapeum temple at Sakkara, to the south of Cairo. – Alarabiya