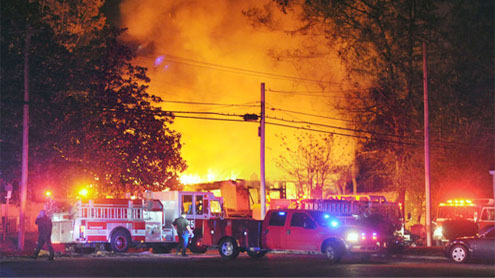 JACKSON, Miss: A small plane with three people aboard crashed into a home near an airport in Jackson Tuesday evening and authorities did not have immediate information on casualties.

A deputy fire chief told WJTV-TV that one person escaped the burning home with minor injuries, but it was not immediately clear if anyone else was inside. One patient from the scene was in good condition at University of Mississippi Medical Center, said spokesman Jack Mazurak. He wouldn’t give the person’s name or gender or the extent of the injuries, citing privacy laws.

Federal Aviation Administration spokeswoman Kathleen Bergen did not immediately have information about the condition of the people aboard the Piper PA-32 single-engine plane. A single home was hit, said Jackson Fire Department Assistant Chief R.D. Simpson and a coroner was on the scene. The fire appeared to be extinguished.Roger and Michele Latham, from Superior Pallet Company in Flowood, Miss., own the plane, said their grown daughter, Emily Latham. Latham was near the crash site and said her father was supposed to have been on board but changed his plans.

“He went hunting,” she said. “Thank God.”Witnesses say large flames and black smoke rose about 50 feet from a burning house that was hit in the neighborhood of modest, single-family homes surrounded by big magnolia and oak trees about a half-mile from the zoo.The plane had just departed Hawkins Field Airport headed for Raymond, Miss., the FAA said.The plane took off at 5:10 p.m. and shortly after, the pilot asked for permission to return to the airport, according to a news release from the Jackson Municipal Airport Authority. The plane was unable to return and crashed.

Vivian Payne, who lives about six blocks from the crash site, said she heard a loud bang that sounded different from an electrical transformer blowing.”It shook the walls of my house,” Payne said as she stood among ambulances, police cars and fire trucks, their lights flashing in the chilly night air.The weather in Jackson is partly cloudy in the 40s.The National Transportation Safety Board along with the FAA will be investigating the cause of the crash. – Yahoonews