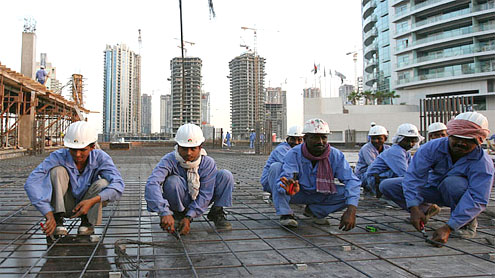 JEDDAH: Saudi Arabia is stepping up efforts to lower unemployment among its citizens by fining private sector firms that employ more foreigners than Saudis, the labour ministry said in a statement carried by state news agency SPA on Tuesday.

The policy, which will be implemented at the start of the new Islamic year on November 15, will require private companies with majorities of foreign workers to pay a fee of 2,400 riyals ($640) a year for each excess foreigner.

The fines will not be applied for foreigners with Saudi mothers, citizens of other Gulf Cooperation Council countries — the United Arab Emirates,  Kuwait, Oman, Qatar and Bahrain — or household help, the statement said.   “The aim of this decision is to increase the competitive advantage of local workers by reducing the gap between the cost of expatriate labour and local labour,” it said.

If it is strictly enforced, the policy could have a major impact on some firms. Roughly nine in 10 employees of private companies in Saudi Arabia are expatriates, according to official estimates; firms prefer to hire foreigners, many from south or southeast Asia, because they command lower wages than locals.

This has helped to boost the unemployment rate among Saudi citizens to about 10.5 per cent — a social problem and potentially a political one too in the long run. Saudi Arabia has a population of over 27 million, of which about nine million are believed to be foreigners.

The Ministry of Labour is trying to change the private sector’s culture from one of “importing cheap labour from abroad to one of developing national talent that is needed by the sector”, Deputy Minister of Labour for planning and development Moufarrej Haqbani was quoted as saying in the statement.

In order to press private firms to hire more locals, the government last year introduced a quota system which imposes minimum numbers of Saudi employees on companies depending on their size and sector. Firms which do not comply face restrictions on obtaining visas for their foreign workers. – Khaleejnews