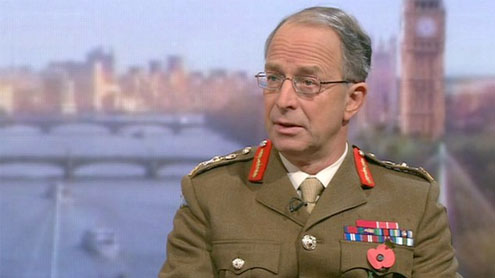 The head of the Armed Forces has warned that defence cuts have left him unable to carry out everything the Government demands.

Chief of the Defence Staff General Sir David Richards said ministers’ demands had not been revised to correspond with the reduced size of the Armed Forces.‘We have a whole load of tasks expected of us,’ he said in an Oxford University lecture.‘Our political masters are quite happy to reduce the size of the Armed Forces, but their appetite to exercise influence on the world stage is, quite understandably, the same as it has always been.‘Often politicians say to me, “can you go and do this?” I say to them, “with what?”,’ the Daily Telegraph reported.

His comments will fuel concerns that the Strategic Defence and Security Review, which heralded an 8 per cent cut in real-terms funding and reductions in manpower totalling 30,000 personnel, has significantly curbed Britain’s ability to project influence in the world.Speaking to Oxford’s department of politics and international relations, Sir David added: ‘If you reduce your Armed Forces, there is going to be a give – something gives.’

He also expressed anxiety about the number of frigates and destroyers possessed by the Royal Navy, saying that was one of his ‘biggest concerns’. The use of advanced warships for comparatively minor operations like Operation Atalanta, an anti-piracy initiative in the Indian Ocean, because of a lack of ships was troubling, he said.

He told the Daily Telegraph: ‘You get to this ridiculous situation where in Operation Atalanta off the Somali coast, we have £1billion destroyers trying to sort out pirates in a little dhow with RPGs (rocket-propelled grenades) costing $50, with an outboard motor (costing) $100.’That can’t be good. We’ve got to sort it out.’He also criticised the failure to find a ‘political resolution’ in Afghanistan despite the opportunities afforded by the military.

‘All the military can do is buy space and time and opportunity for a political resolution of a problem. It is a great shame that we have not understood this. This is not a matter for military, diplomats, politicians. This is a matter of collectively failing to exploit the opportunity the military gained,’ he said.The general also blasted plans to slash the number of senior officers. MPs have claimed the forces are top-heavy, but Sir David siad fewer senior officers makes liaising between services, vital as Britian’s military night shrinks, much more difficult.

In a statement issued by the Ministry of Defence last night, the Chief of the Defence Staff insisted that the military capability required under the defence review could be achieved with the resources available, but said ‘candid military analysis ensured ministers were aware of the constraints.Sir David said: ‘The nature of military operations is that need is always balanced against available resources.’It is the job of senior military commanders to help the government assess those priorities against the resources available, especially in the current economic conditions.

‘It is right that candid military analysis keeps the Government aware of constraints while the Government, rightly, seeks to achieve the maximum effect with the assets available.’As I have said before, I and the Chiefs of Staff agree that we can deliver the military capability required by the SDSR with the resources available.‘On Afghanistan, we all agree that you cannot win an insurgency through military means alone, it has always been understood that a political solution will ultimately be required.’ – Dailymail