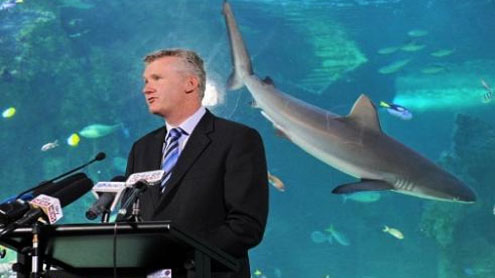 Australia has created the world’s largest network of marine reserves, protecting oceans around its coast.

Over 2.3 million sq km (0.9 million sq miles) of sea, made up of five zones, have been formally protected by law from over-fishing and oil exploration.Environment Minister Tony Burke called it a historic moment for ocean conservation.However fishing lobby groups opposed the move, saying it will damage the multi-million dollar industry.The network of reserves was announced by the Australian government in June, and became formally proclaimed under national environmental law on Friday.

The newly-declared reserves are an addition to existing protected zones around Australia, taking the overall size of the marine reserves network to 3.1 million sq km (1.2 million sq miles).’Mr Burke said the reserves represented a major achievement for the long-term conservation of Australia’s oceans.”Australia is home to some incredible marine environments including the Perth Canyon in the south-west and the stunning reefs of the Coral Sea, and this announcement cements Australia’s position as a world leader on environmental protection,” he said.

The sea around Australia is home to sharks and tuna, isolated tropical reefs and deep sea canyons.Mr Burke also announced 100m Australian Dollars ($103m; £65m) set aside for compensating fishing businesses affected by the move. However, he said “this entire project has an impact of less than 1% of the total value of production for our wild catch fisheries.”Fishing groups have criticised the cap, saying that the allocation did not go far enough, and that people in the industry would be put out of business.

The Australian Marine Alliance said that 36,000 jobs would be lost and the cost of seafood imports would soar, news agency AFP reported.Opposition leader Tony Abbott said that he supported environment protection, but was concerned that there had not been sufficient consultation, or strong scientific evidence for the reserve.Conservation groups welcomed the new laws, but said that there was more work to be done to protect Australia’s oceans. – BBC