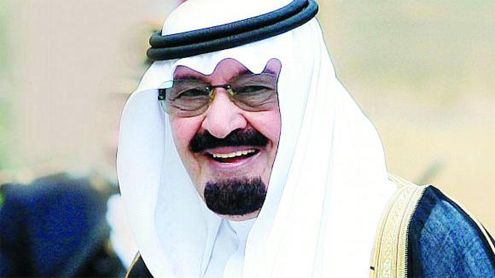 Custodian of the Two Holy Mosques King Abdullah yesterday received congratulatory cables from regional Saudi governors on the success of a back surgery he underwent on Saturday at King Abdul Aziz Medical City.

The operation, to correct “a ligamentary slackening in the upper back” of the king, ended at dawn on Sunday, said the Royal Court in statement quoted by Saudi Press Agency.King Abdullah had undergone necessary medical tests on Saturday afternoon in preparation for the surgery, the royal court said, adding that it continued until 4.35 p.m.“After that the surgical operation started and it continued until 3.15 a.m. on Sunday and the surgery was a success,” it added.Crown Prince Salman received telephone calls from Arab leaders who congratulated the king on the successful surgery.

To mark the happy occasion, Prince Nawaf bin Faisal, head of the Youth Welfare Presidency, has written off all the loans given to sports federations and clubs. Eastern Province Gov. Prince Muhammad bin Fahd sent a cable on behalf of himself and people of the province, expressing his profound happiness over the operation’s success.The governor wished the king good health and long life to continue his efforts in the service of Islam and Muslims.Jazan Gov. Prince Muhammad bin Nasser also congratulated King Abdullah. “On behalf of Jazan people, I would like to congratulate you on the success of the surgery.” – Arabnews