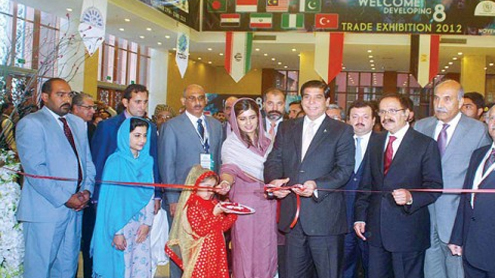 ISLAMABAD: Prime Minister Raja Parvez Ashraf has emphasised the need for free trade agreements and removal of barriers to bolster trade between D-8 countries.Inaugurating the 8th D-8 trade exhibition in Islamabad on Monday, the prime minister said the D-8 countries should work together, in partnership and in harmony to take mutual trade to $500 billion by 2018.

He said the D-8 governments took many practical steps to facilitate promotion of trade during the past fifteen years. “Important framework agreementssuch as Preferential Trade Agreement, Agreement on Visa facilitation and Cooperation on Customs matters have been put in place. Forums have also been created to promote institutional linkages among the business community,” he added. The premier said the member countries have a huge market of a billion people and benefits of trading with each other would be enormous,‘the surest way to improve the economic indicators of our countries.’

He said that Pakistan was keen to expand business and trade relations with the D-8 countries.  “We have ratified all three key agreements, including the Preferential Trade agreement. We are convinced that implementation of tariff concessions under this agreement would lead the D-8 community towards greater economic integration.“He pointed out that on the eve of the D-8 Summit, we have taken the initiative of organiSing the first ever meeting of the heads of Trade Promotion Organizations in Pakistan.”The prime minister said that Trade Promotion Organizations could play a vital role in catalysing the private sector, and identifying avenues of cooperation in trade promotion. He hoped that the summit would come up with concrete and practical recommendations to expand trade relations.

Emphasizing the need for regional trade, he said Pakistan aimed to increase its exports in the region from 17 percent to 25 percent.He said: “Pakistan believes that access to markets should be based on equitable principles. We have always raised our voice for promoting unhindered market access. He said the democratic government believes in trade, not aid.”Proposing to promote trade in services, he said that this would immensely benefit D-8 countries, adding that there was a substantial scope for cooperation in developing the skill neededfor industrial sector in D-8 countries.

Referring to steps taken by the government in the economic sphere, the prime minister said the fundamentals of Pakistan’s economy were robust. “Record exports were registered last year. Stock Exchanges are buoyant. Our government has taken concrete steps in the trade policy to enable the private sector to play a key role in rising export. To create an enabling environment for trade, we are also building a sound macro-economic framework,” he revealed. He was confident that the trade exhibition would result in forging long lasting trade links among D-8 members. Commerce Minister Makhdoom Amin Fahim said the exhibition would lend an opportunity to deepen trade ties and open new vistas of joint ventures.

He suggested that the exhibition should be held annually to build long term trade relationships between the member countries. Pakistan, Bangladesh, Indonesia, Iran, Malaysia, Nigeria and Turkey have put their products on display in the exhibition. Pakistan has placed halal food, engineering and textile products. The premier along with Foreign Minister Hina Rabbani Khar and Commerce Minister Amin Fahim visited various stalls. – Nation