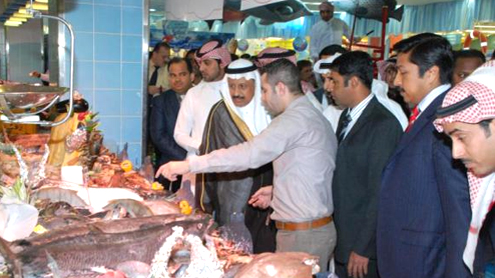 “The plan is to promote aquaculture in the Kingdom and to increase fish production from the current 100,000 tons per year to 1 million tons within the next 17 years,” said the official.Al-Shehri was speaking to newsmen after formally inaugurating a “Sea Food Festival” at Lulu Hypermarket.The festival’s opening ceremony was attended by several Saudi officials and top executives of the Lulu Hypermarket including Shehim Mohammed Unni, regional director for the Lulu Hypermarkets.

The week-long Lulu seafood festival showcases a huge variety of seafood under one roof in Lulu Hyparmarkets in Riyadh and Eastern Province. The festival at Lulu in Eastern Province was inaugurated by Nabeel Ibrahim Fateh, director of Marine Fisheries Research Institute of the Eastern Province.Al-Shehri said the state-owned Saudi Agricultural Development Fund (SADF) is leading an initiative at attaining self-sufficiency in the production of fish and seafood.

“It is the seventh initiative launched by the fund, which will go a long way in boosting local production of fish and other variety of seafood,” said the vice minister.He said the Saudi government aims to increase seafood production to one million tons. “To reach this goal, capacity must grow significantly,” he added. There are many projects licensed for aquaculture and the Saudi government agencies are hopeful that by providing financial incentives, firms will be encouraged to kick-start some projects, he added.

He noted that “the Kingdom is also exporting fish to a few countries including China, Japan and some European countries.Al-Shehri said the present local production caters to only 40 percent of our domestic consumption.“We are importing 60 percent of our seafood consumption from various countries,” said the vice minister, adding that the Kingdom is working closely to promote this sector.The Kingdom recently signed an agreement with the Food and Agriculture Organization (FAO) to allocate $ 66.7 million to implement the latter’s technical assistance projects in the Kingdom.

As part of this agreement, FAO will provide technical assistance and expertise for 17 specific projects in Saudi Arabia covering several areas under the five-year program from 2012 to 2016. On top of this, the Ministry of Agriculture is exerting every effort in the aquaculture field by offering financial and technical support to existing projects and those who are willing to enter into this sector with new projects.One of the new areas in which the private sector is investing with government support is aquaculture. The Saudi government agencies are also extending financial facilities to Saudi men to work in this sector. The Kingdom has four major fisheries — three on the Red Sea and one on the Arabian Gulf. The favorite seafood in the Kingdom is shrimp.

Historians try to dig out details of America’s earliest Muslims

Historians try to dig out details of America’s earliest Muslims