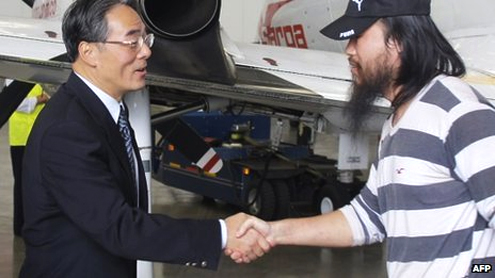 Colombia’s Farc rebel group have freed four Chinese hostages who had been held captive for 17 months.

The oil-company workers were released days after the start of peace talks between the leftist rebels and the Colombian government in Cuba.Earlier this year, the Farc said they would no longer resort to kidnapping or holding prisoners.The four Chinese nationals are thought to have been the only foreign hostages held by the group.Earlier this week Farc leaders declared a two-month ceasefire.

The Marxist group has been fighting against the government for five decades, in a conflict in which some 600,000 people have died.Colombian President Juan Manual Santos said he had spoken to Chinese embassy officials and wanted to celebrate the release of the hostages.”Kidnapping is something that should never happen again,” he wrote on his Twitter feed.

The workers were turned over to Red Cross staff in a rural area of southern Colombia.Officials said they were in good health.The four men were working for the British oil company Emerald Energy, a subsidiary of China’s Sinochem, when they were snatched in March 2011.The Farc, who numbered 16,000 in 2001, are now thought to have some 8,000 fighters. – BBC