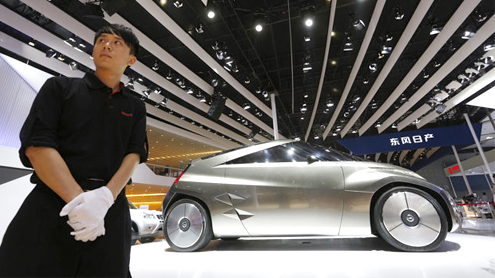 GUANGZHOU, China: Global automakers and their Chinese rivals put on sleek displays of new cars at a major auto show Thursday in Guangzhou, the southern Chinese stronghold of Japanese brands that have been hard hit by tensions between Tokyo and Beijing.

Nissan Motor Co., Toyota Motor Corp. and Honda Motor Co. were among the dozens of brands showcasing new vehicles at the auto show, the first major marketing event since the tensions flared in September.The beleaguered Japanese automakers have suffered sharp drops in their China sales since a territorial dispute over East China Sea islands flared in September, inflaming anti-Japanese sentiment and sparking sometimes violent protests. But they didn’t shy away from showing off new models, going head to head with less established rivals sensing an opportunity to seize market share.

The show caps a year of relatively slow sales for carmakers in China, where competition is stiffening after years of white-hot growth. Despite the slowdown, the country remains the world’s biggest auto market, underscoring its importance to carmakers.”Although the automobile market of China confronts great uncertainties, its great potentiality still makes us confident and eager for the future,” said Yao Yiming, deputy general manager of one of Honda Motor Co.’s local joint ventures, Guangqi Honda. Honda unveiled several models for the China market including the Fit Hybrid.

Foreign marques such as PSA Peugeot Citroen, a relative newcomer to China, also brought new models tailored specifically for the Chinese market, which is having an increasingly large influence on auto designs.The anti-Japanese sentiment is “of course” giving a boost to the French automaker’s sales, said Jean-Yves Dossal, the company’s director of Asian operations. “Not that much, but still this is true that some Chinese customers are scared a little bit of buying a Japanese car.”

The company’s new models include the Peugeot 3008, a crossover sport utility vehicle that is more aggressively styled than the European version, and the Citroen C4L, a midsized sedan that’s only sold in China.Ailing Chinese brand BYD Auto, backed by billionaire investor Warren Buffet, launched the Si Rui, a midsized sedan equipped with high-tech touches like a night vision display that it hopes will replicate the success of its best-selling F3 sedan. Fiat SpA, another latecomer to China, highlighted the Viaggio, its first car produced in China, which went on sale in September.

Jack Cheng, general manager of the company’s joint venture with Guangzhou Automobile Group, said China will be the “locomotive” for Fiat’s global sales. He said the company aims to sell 80,000-100,000 vehicles annually in a few years.China overtook the United States in 2009 as the world’s biggest auto market by vehicles sold. Sales grew a blistering 35 percent in 2010 thanks partly to government incentives but have eased off as the government tightened lending and investment to cool inflation and an overheated economy. Restrictions imposed by cities on car registrations to cut traffic congestion and smog also played a role. Sales in October rose 6.4 percent to 1.3 million vehicles, after contracting 0.3 percent in September.

Many global automakers have been expanding in China to counter stagnant markets at home. Some 18.5 million vehicles were sold in China last year and automakers expect that number to rise to 30 million by 2020.IHS Automotive analyst Namrita Chow said she expects carmakers like Peugeot and Hyundai to use the show to “strengthen brand awareness of their vehicles in the hope that they gain some of the lost Japanese market share.”

Toyota’s vehicle sales in China fell 44 percent year-on-year in October to 46,000, following a similar decline in September. The company has already lowered its full-year sales target to 850,000 from 1 million because of the anti-Japanese sentiment. Nissan, which has seen China become its biggest market, and Honda have had similar sales drops and have also adjusted their forecasts. Nissan’s China sales were down 41 percent in October to about 64,000 while Honda’s dropped 46 percent to 24,000.

Monthly sales data showed that other foreign brands long established in China including General Motors and Volkswagen were benefiting the most as customers opted to stay away from Japanese brands.A few Japanese carmakers were ratcheting up their marketing efforts at the show, the 10th annual China (Guangzhou) International Automobile Exhibition, also known as Auto Guangzhou. Toyota brought 34 production and concept vehicles.The Japanese brands will have to persuade potential buyers like Dong Liang, a 29-year-old engineer weighing his options as he prepares to buy his first car.

“I’m not considering buying Japanese cars,” Dong said. “I’m kind of boycotting Japanese goods, not just since the recent dispute but for quite a long time. I prefer Chinese cars or American cars.”Dong, a Shanghai resident, said he had narrowed down his options to three compact cars, Chevrolet’s only-in-China Sail, the Ford Focus and the Fulwin2 from Chinese brand Chery Automobile Co.But some analysts said the stigma over Japanese brands may fade sooner than expected.”There’s a fear factor, people are reluctant to buy because they fear retribution of violence,” said Mike Dunne, an analyst who has worked in China’s auto industry since the 1990s. “At the same time Chinese consumers at their core are so pragmatic and practical I see them eventually coming back to the Japanese.”

IHS Automotive’s Chow said that while Japanese brands are seeing slower sales, lower volumes and production cuts, they are not “out of the game at all.”Other brands were paying little attention. Marin Burela, president of Ford Motor Co.’s joint venture with Changan Automobile Co., said the company has had to ramp up production of its Kuga crossover ahead of its upcoming China debut because it has been more popular than expected.

Ford, which announced plans in September to build a $760 million auto assembly plant in China as part of a plan to double production capacity, sold 318,000 cars in China from January to October, and Burela predicted the number would top 400,000 for the full year.He called the nationalist dispute “noise going on in the background. We don’t pay any attention to it.” – Yahoonews