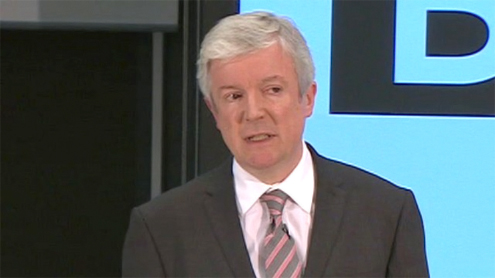 Tony Hall, the new director general of the BBC, has said he is confident the corporation can get through a “really tough few weeks”.

Lord Hall, chief executive of the Royal Opera House and the BBC’s former director of news, said he cared passionately about the organisation.”I am absolutely committed to our news operation as a world-beater,” he said.His appointment follows the resignation of George Entwistle in the wake of the Newsnight Lord McAlpine row.Speaking at a news conference at the BBC’s headquarters in central London, Lord Hall said: “It takes a lot to drag me away from the Royal Opera House Covent Garden, a place I love hugely.

“The reason I’m standing before you today is because I care passionately about the BBC, about what it can do, its programme makers and the impact we have in all sorts of different ways.”It’s one of those extraordinary organisations which is an absolutely essential part of the UK, of Britain, of who we are, but also has this incredible impact around the world too.”He said he wanted “to build a world-class team for this world-class organisation”.

Sixty-one-year-old Lord Hall is due to take over the role – currently occupied by acting director general Tim Davie – in early March, on a salary of £450,000 a year.Lord Hall joined the BBC as a news trainee in 1973 and during his 28-year career at the corporation oversaw the launch of Radio 5 live, the BBC News Channel, the BBC News website and BBC Parliament.He is believed to have been on the final shortlist for the director general post in 1999 when Greg Dyke was appointed.BBC Trust chairman Lord Patten said Lord Hall was “the right person to lead the BBC out of its current crisis” and the “out-and-out outstanding candidate”.

Introducing Lord Hall at the news conference, he confirmed the Trust had approached him directly.”We might have considered going through the whole lengthy recruitment process again…”But I believe the approach we have taken is ultimately in the interests of the BBC and, most importantly, licence fee-payers as we have got the best candidate and he will help the organisation quickly get back on an even keel.”He added: “We had a process with Tony where we interviewed him and he interviewed us and asked some pretty good questions about the BBC.”

“If you appoint the outstanding candidate it does seem that arguments about the process are somewhat by and by.”He said was “delighted” Lord Hall will spearhead the task of rebuilding trust in BBC journalism.He said: “Tony has a formidable reputation, first of all in almost three decades at the BBC. He’s had an equally distinguished record as leader of one of the great cultural organisations in the UK.”Mr Entwistle quit on 10 November – 54 days after starting – saying that as editor-in chief he had to take “ultimate responsibility” for a Newsnight investigation that had led to the former Conservative Party treasurer, Lord McAlpine, being wrongly accused of child abuse.

It came after the BBC had already spent several weeks at the centre of a scandal over alleged sexual abuse carried out by the late DJ and TV presenter Jimmy Savile – some of it on BBC premises.The corporation has launched several inquiries.The BBC’s arts editor, Will Gompertz, said Lord Hall had been an innovative manager after leaving the BBC in 2001 for the Royal Opera House and had transformed it as a business.But he said the BBC was now a much different place, and in a “changed” media landscape Lord Hall would face challenges in taking it forward.

Former BSkyB and ITV executive David Elstein said he found Lord Hall’s appointment puzzling.”Tony’s an excellent person, who was turned down for the job in 1999, when Greg Dyke was selected and who couldn’t be bothered to apply for the job last time,” he said.However, Lord Patten told reporters that Lord Hall had been approached but had been involved in the London 2012 arts festival, the Cultural Olympiad at the time.

“He said he’d loved his time at the BBC but maybe a younger person should do the job. Clearly by this November things had changed substantially.”Culture Secretary Maria Miller said Lord Hall had “a very strong track record in successfully leading iconic organisations” but added: “It is important now that Tony Hall gets to grips quickly – to provide the stability and certainty that the BBC needs, and restore public confidence.”Labour leader Ed Miliband said Tony Hall was an “excellent choice” but must restore confidence and trust in the BBC. – BBC