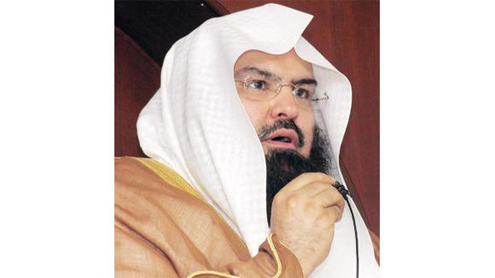 Islam is a religion of dialogue

Abdul Rahman Al-Sudais, head of the Presidency of the Two Holy Mosques, has highlighted the significance of dialogue with other cultures and religions, saying it is a good medium to spread the message of Islam.

“The Holy Qur’an, which is an eternal miracle, contains different forms of dialogue. So we can understand that dialogue is a method encouraged by God,” said Al-Sudais.In a statement on the occasion of the opening of King Abdullah Bin Abdulaziz International Center for Interreligious and Intercultural Dialogue (KAICIID) in Vienna today, he said dialogue should be conducted wisely.“The formation of this center in the West with King Abdullah’s support gives a strong message that Islam is a religion of dialogue and understanding and not a religion of enmity, fanaticism and violence,” he said.

“This is a historic event in cultural relations between the East and West,” Al-Sudais said, adding that the center would play an important role in narrowing differences between followers of different religions and cultures.He said the Vienna center crowns King Abdullah’s interfaith dialogue initiative, which he announced four years ago. The participation of hundreds of prominent international personalities in the opening ceremony reflects the king’s global reputation, he added.

Speaking about the Vienna center, he said it would promote human values, tolerance and peaceful coexistence among people of different religious faiths and cultures.He said King Abdul Aziz, the founder of Saudi Arabia, had used dialogue as an effective tool to unify the country. He praised King Abdullah for setting up the King Abdul Aziz National Dialogue Center in Riyadh as an effective channel for responsible expression of views and opinions. “The Riyadh-based center was instrumental in discussing a number of pressing issues that face the country,” Al-Sudais said.

Located in Vienna, a city long used to being a bridgehead between world religions and cultures, KAICIID is an independent, international organization, free of political or economic influence. The founding states (Saudi Arabia, Austria and Spain) constitute the “Council of Parties” responsible for overseeing the establishment of the center.

Secretary-General Faisal bin Muammar said: “It is my profound belief that this center can become a place of leadership and applied learning; a place where candid dialogue among followers of different religions and cultures can flourish so that we can value and cherish the richness of our diversity and live together as good neighbors.”Muammar added: “I am convinced that KAICIID will, within a short period of time, build a bridge for better mutual understanding, facilitating interreligious and intercultural dialogue to enhance cooperation, respect for diversity, justice and peace.”