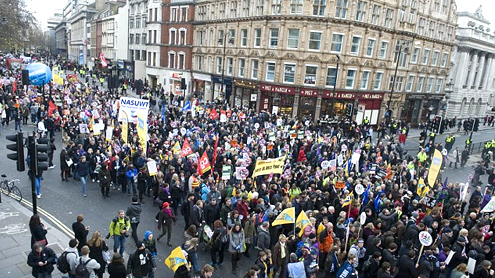 Hidden public service cuts will drain Britain’s poorest families of 30 per cent of their annual income by 2017, as the coalition’s tough spending targets begin to bite, new TUC research reveals.

It said reductions in benefits and family tax credits, combined with continuing cuts to welfare, will ’cause considerable financial harm for millions of families’.The dire predictions come as chancellor George Osborne prepares to deliver his autumn statement on December 5, in which he is expected to detail a further £10bn of welfare savings over the next five years.’Unless George Osborne changes course,’ the TUC warned. ‘These cuts will be dwarfed by massive reductions in public services.’

Their figures revealed that by 2016-17, the cumulative cost of lost public services for the poorest ten per cent of household will be £3,995 in cash terms – or 31.7 per cent of their average annual income.By contrast, the top tenth of the income scale will lose just £2,805 – or 2.5 per cent of annual income.This is because higher earners may use public transport less frequently, opt out of public schooling or healthcare, and less likely to rely on Sure Start centres.

The analysis also said that the average household had already lost more than £1,200 in public services but the real pain is still to come – this is just a third of the cuts they are likely to experience by 2014-2015.The TUC report coincided with a study by the Joseph Rowntree Foundation which found that 6.1m people in working households live in poverty and more than 5.1m people live in working age households where no one has a job.

Julia Unwin, the foundation’s chief executive, told The Observer: ‘The most distinctive characteristic of poverty today is the very high number of working people who are also poor.’Nick Davies, policy director at Children England, said on the scaling back back of children’s services: ‘Demand has increased, but funding reduced, and that has led to the withdrawal of some services and the rationing of others.

‘Local authorities have to focus on their statutory responsibilities and other things get neglected.’Alison Garnham, chief executive of the Child Poverty Action Group, added: ‘We are hearing reports from welfare rights advisers up and down the country that the services they provide are being cut or closed down.’So a perfect storm is brewing: benefit cuts, service cuts and large-scale welfare reform.’ – Dailymail