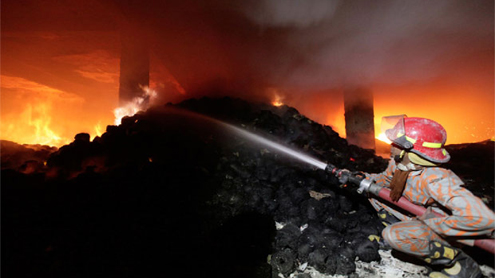 A fire swept through a garment factory on the outskirts of Bangladesh’s capital, killing at least 120 people, the chief of the fire brigade said on Sunday, in the worst accident for the booming industry in recent years.

The fire at the nine-story factory in the Ashulia industrial belt started on the ground floor late on Saturday and quickly spread, trapping hundreds of workers.“This morning we have recovered 120 dead bodies and the death toll could rise,” Abu Nayeem Mohammad Shahidullah, director general of the fire brigade, told reporters.Bangladesh has around 4,500 garment factories that make clothes for brands including Tesco, Wal-Mart, JC Penney, H&M, Marks & Spencer, Kohl’s and Carrefour.Witnesses said the workers, mostly women, ran for safety as the fire engulfed the plant, but were unable to come out through narrow exits.

“Many jumped out from the windows and were injured, or died on the spot,” Milon, a resident, said.The fire leapt high into the sky and could be seen from miles (kms) away.Bangladesh is the world’s biggest exporter of clothing after China, with garments making up 80 percent of its $24 billion annual exports.But safety standards at the factories are poor and not enforced strictly, causing scores of accidents each year.“We are appalled to see the charred bodies coming out of the factory since last night. It was an endless stream,” Milon said.

Saturday’s fire was the worst in years and rescuers and police said the death count may surpass any previous toll.Earlier this year, more than 300 factories near the capital were shut for almost a week as workers demanded higher wages and better working conditions.

At least 13 people were killed and dozens are feared missing after a flyover under construction collapsed in Bangladesh’s southeastern port city of Chittagong, police said Sunday.“So far 13 dead bodies have been recovered,” sub-inspector Mohammad Alauddin told AFP, adding that military rescue teams had been called in to help with the search for victims.The number of missing could not immediately be confirmed but police constable Shakakhawat Hossain told AFP from the scene that dozens could be trapped under the debris.

Witnesses said more than 50 construction workers and vegetable hawkers had gathered near a pond under the bridge at the end of work when three concrete girders of the under-construction flyover crashed on Saturday evening.“Instantly the whole area was covered by smoke and dust,” Syed Mainuddin, a witness, told reporters.Police and local people rescued at least 15 people from the spot and rushed them to hospital, police said.

Chittagong fire brigade chief Abdul Mannan told AFP each of the girders are about 100 feet (30 metres) long and about seven feet wide.“We are trying to cut the girders into pieces to see if anyone was trapped underneath. We tried to pull the girders up with cranes but they are too heavy,” he said.Divers from the navy, meanwhile, scoured the pond but until the girders were removed chances of finding more dead bodies were remote, he added.

Armed with sticks and stones, angry crowds attacked the site offices of the construction company after the flyover collapsed, forcing police to fire tear gas and use batons to disperse them, Hossain said.The mob torched at least half a dozen vehicles and set construction material on fire.Allegations of corruption were levelled at the flyover construction company in August when another girder had collapsed. But only one rickshawpuller was injured in that incident, police inspector Rajib Das said.

In September the World Bank said it was concerned about corruption in Bangladesh, reiterating that it would not get new funding for a bridge project until a credible probe into corruption around the project was undertaken.The Washington-based institution said it was not yet prepared to reactivate financing for the $3 billion Padma road and rail bridge which was intended to connect the capital Dhaka to coastal districts. – Khaleejnews