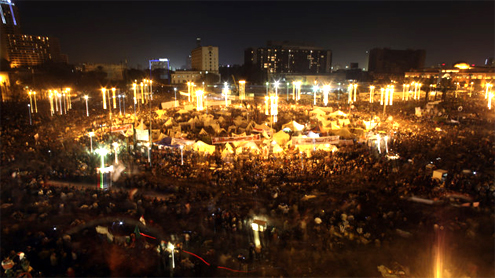 CAIRO: The same chants used against Hosni Mubarak were turned against his successor Tuesday as more than 200,000 people packed Egypt’s Tahrir Square in the biggest challenge yet to Islamist President Mohammed Morsi.

The massive, flag-waving throng protesting Morsi’s assertion of near-absolute powers rivaled some of the largest crowds that helped drive Mubarak from office last year.”The people want to bring down the regime!” and “erhal, erhal” — Arabic for “leave, leave” — rang out across the plaza, this time directed at Egypt’s first freely elected president.

The protests were sparked by edicts Morsi issued last week that effectively neutralize the judiciary, the last branch of government he does not control. But they turned into a broader outpouring of anger against Morsi and his Muslim Brotherhood, which opponents say have used election victories to monopolize power, squeeze out rivals and dictate a new, Islamist constitution, while doing little to solve Egypt’s mounting economic and security woes.

Clashes broke out in several cities, with Morsi’s opponents attacking Brotherhood offices, setting fire to at least one. Protesters and Brotherhood members pelted each other with stones and firebombs in the Nile Delta city of Mahalla el-Kobra, leaving at least 100 people injured.”Power has exposed the Brotherhood. We discovered their true face,” said Laila Salah, a housewife at the Tahrir protest who said she voted for Morsi in last summer’s presidential election. After Mubarak, she said, Egyptians would no longer accept being ruled by an autocrat.

“It’s like a wife whose husband was beating her and then she divorces him and becomes free,” she said. “If she remarries she’ll never accept another day of abuse.”Gehad el-Haddad, a senior adviser to the Brotherhood and its political party, said Morsi would not back down on his edicts. “We are not rescinding the declaration,” he told The Associated Press.That sets the stage for a drawn-out battle that could throw the nation into greater turmoil. Protest organizers have called for another mass rally Friday. If the Brotherhood responds with demonstrations of its own, as some of its leaders have hinted, it would raise the prospect of greater violence after a series of clashes between the two camps in recent days.

A tweet by the Brotherhood warned that if the opposition was able to bring out 200,000 to 300,000, “they should brace for millions in support” of Morsi.Another flashpoint could come Sunday, when the constitutional court is to rule on whether to dissolve the assembly writing the new constitution, which is dominated by the Brotherhood and its Islamist allies. Morsi’s edicts ban the courts from disbanding the panel; if the court defies him and rules anyway, it would be a direct challenge that could spill over into the streets.

“Then we are in the face of the challenge between the supreme court and the presidency,” said Nasser Amin, head of the Arab Center for the Independence of the Judiciary and the Legal Profession. “We are about to enter a serious conflict” on both the legal and street level, he said.Morsi and his supporters say the decrees were necessary to prevent the judiciary from blocking the “revolution’s goals” of a transition to democracy. The courts — where many Mubarak-era judges still hold powerful posts — have already disbanded the first post-Mubarak elected parliament, which was led by the Brotherhood. Now it could also take aim at the Islamist-led upper house of parliament.

Morsi’s decrees ban the judiciary from doing so and grant his decisions immunity from judicial review. Morsi also gave himself sweeping powers to prevent threats to the revolution, stability or state institutions, which critics say are tantamount to emergency laws. These powers are to remain in effect until the constitution is approved and parliamentary elections are held, not likely before spring 2013.Opponents say the decrees turn Morsi — who narrowly won last summer’s election with just over 50 percent of the vote — into a new dictator, given that he holds not only executive but also legislative powers, after the lower house of parliament was dissolved.

Tuesday’s turnout was an unprecedented show of strength by the mainly liberal and secular opposition, which has been divided and uncertain amid the rise to power of the Brotherhood over the past year. The crowds were of all stripes, including many first-time protesters.”Suddenly Morsi is issuing laws and becoming the absolute ruler, holding all powers in his hands,” said Mona Sadek, a 31-year-old engineering graduate who wears the Islamic veil, a hallmark of piety. “Our revolt against the decrees became a protest against the Brotherhood as well.”

“The Brotherhood hijacked the revolution,” agreed Raafat Magdi, an engineer who was among a crowd of some 10,000 marching from the Cairo district of Shubra to Tahrir to the beat of drums and chants against the Brotherhood. Reform leader Mohammed ElBaradei led the march.”People woke up to (Morsi’s) mistakes, and in any new elections they will get no votes,” Magdi said.

Many in the crowd said they were determined to push ahead with the protests until Morsi retreats. A major concern was that Islamists would use the decree’s protection of the constitutional assembly to drive through their vision for the next charter, with a heavy emphasis on implementing Shariah, or Islamic law. The assembly has been plagued with controversy, and more than two dozen of its 100 members have quit in recent days to protest Islamist control.

“Next Friday will be decisive,” protester Islam Bayoumi said of the upcoming rally. “If people maintain the same pressure and come in large numbers, they could manage to press the president and rescue the constitution.”A fellow protester, Saad Salem Nada, said of Morsi: “I am a Muslim and he made me hate Muslims because of the dictatorship in the name of religion. In the past, we had one Mubarak. Now we have hundreds.”Even as the crowds swelled in Tahrir, clashes erupted nearby between several hundred protesters throwing stones and police firing tear gas on a street leading to the U.S. Embassy. Clouds of tear gas hung over the area, where clashes have broken out for several days, fueled by anger over police abuses.

A photographer working for the AP, Ahmed Gomaa, was beaten by stick-wielding police while covering the clashes. Police took his equipment and Gomaa was taken to a hospital for treatment.Rival rallies by Morsi opponents and supporters turned into brief clashes in the Mediterranean city of Alexandria, where anti-Morsi protesters broke into the local office of the Muslim Brotherhood, throwing furniture out the windows and trying unsuccessfully to set fire to it. Protesters also set fire to Brotherhood offices in the city of Mansoura.

Morsi’s supporters canceled a massive rally planned for Tuesday in Cairo, citing the need to “defuse tension.” Morsi’s supporters say more than a dozen of their offices have been ransacked or set ablaze since Friday. Some 5,000 demonstrated in the southern city of Assiut in support of Morsi’s decrees, according to witnesses there.So far, there has been little sign of a compromise. On Monday, Morsi met with the nation’s top judges and tried to win their acceptance of his decrees. But the move was dismissed by many in the opposition and the judiciary as providing no real concessions.

Saad Emara, a senior Muslim Brotherhood member, said Morsi will not make any concessions, especially after the surge of violence and assaults on Brotherhood offices.Emara accused the opposition “of resorting to violence with a political cover,” claiming that former ruling party and Mubarak-era businessmen were hiring thugs to attack Brotherhood offices with the opposition’s blessing.”The story now is that the civilian forces are playing with fire. This is a dangerous scene.” – Yahoonews

Venezuela President Chavez back to Cuba for treatment

Venezuela President Chavez back to Cuba for treatment