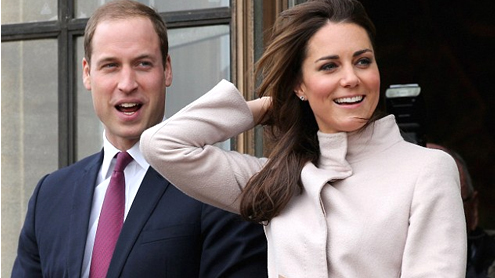 The acute morning sickness suffered by the Duchess of Cambridge causes nausea for up to five months of pregnancy or even until the birth – and it increases the chance of having twins.

Known as hyperemesis gravidarum, it afflicts one pregnancy in 50 and is much more serious than the nausea commonly experienced by expectant mothers.The condition can lead to severe dehydration and puts both mother and baby at risk of being deprived of essential nutrients.Sufferers can be left vomiting up to 30 times a day, with exhausting and hazardous consequences.

They cannot eat or drink without retching and may lose up to 10 per cent of their body weight, which can trigger a build-up of toxins in the blood or urine known as ketosis as the body tries to compensate for lack of food by mouth.Hospital treatment for these women is essential, as without intravenous feeding and fluids they are at risk of becoming dangerously dehydrated.Experts revealed last night that there is a ‘tiny excess’ of women who give birth to twins after enduring the condition.

An enlarged placenta – which is a known risk factor for morning sickness – is more common in multiple pregnancies, such as twins or triplets, or during a molar pregnancy, where the fertilisation of the egg goes wrong and leads to an abnormal growth of cells inside the womb.Other symptoms of the condition – including low blood pressure and fast heart rate, headaches, lethargy or confusion – can also leave mothers-to-be feeling very unwell.

No anti-sickness medication has been officially licensed for pregnant women, but experts say there is accumulated evidence to suggest these treatments are safe.Babies whose mothers have hyperemesis can be born premature or at low birth weight. It can prove fatal in extreme cases, and some women have even terminated their pregnancies on medical advice because of the risk to their own health.Women who are diagnosed with hyperemesis also face the dilemma about whether to have more than one child, as they are likely to go through the same ordeal again.

Mother-of-three Caitlin Dean, 31, ended up in hospital every time she got pregnant. She is trustee of charity Pregnancy Sickness Support, which she set up with two doctors to improve awareness of the ‘misunderstood, unrecognised’ issue.She admitted her ‘blood boils’ when she hears people recommending ginger for pregnancy sickness or suggesting ‘positive thinking’, adding: ‘Women with extreme sickness usually need hospital treatment. They may be vomiting 20 or 30 times a day as I was, and they’re worried about the baby.

‘There is a great deal of evidence that anti-sickness medication is safe and effective in pregnancy but some doctors appear reluctant to use it. Yet this is serious if left untreated. Before modern medicine it was the biggest cause of maternal death and led to the death of Charlotte Bronte.’Consultant obstetrician Daghni Rajasingam, of the Royal College of Obstetricians and Gynaecologists, said: ‘In very simple terms hyperemesis means vomiting a lot and gravidarum means in pregnancy.‘The diagnosis is given when women cannot keep food or fluid down because she has severe vomiting. The women who are vomiting pretty much constantly, who cannot keep any nutrients down, they need to be admitted to hospital.’

She said the condition is thought to be caused by elevated levels of ‘pregnancy hormone’ HCG, or human chorionic gonadotropin, which increases after conception.Dr David Williams, consultant obstetric physician at the Institute for Women’s Health, part of University College London Hospital, said: ‘It’s a really miserable condition. Pregnancy should be a joyful happy time but these women feel dreadful. Most are affected in early pregnancy and the worst should be over by week 16, but for some it goes on for much longer.’

Dr Williams said he tends to keep newly diagnosed women in hospital for several days to ensure their condition is stabilised, adding: ‘There is a risk of discharging them too soon and then the sickness comes straight back.’Treatment typically includes an injection of anticoagulant heparin to protect against blood clots triggered by dehydration, as well as supplementation of vitamin B, one of the vitamins most depleted by the condition.

An intravenous infusion of saline for rehydration is standard practice. Anti-emetic, or anti-sickness, drugs that are commonly given include metoclopramide and Stemetil. These may be used in hospital or when the woman is discharged to help prevent recurrent attacks.Steroids are a useful drug, often in the form of oral prednisolone tablets, Dr Williams said. Another drug that can be used where necessary is ondansetron, originally developed to combat sickness caused by cancer agents, he added.

Dr Williams continued: ‘Hyperemesis sufferers often suffer from acid reflux, where stomach acid keeps repeating up the throat. A drug called omeprazole, also known as Losec, can be used for this.‘Although none of these drugs have been licensed for pregnant women – drug companies are reluctant to do this – we have a solid body of experience because sickness in pregnancy is relatively common, albeit not usually at the extreme end of the spectrum.’

Some theories suggest that morning sickness has a protective role in pregnancy, possibly by stopping vulnerable women from consuming food that might be harmful, and Dr Williams agrees.‘It’s possibly an evolutionary mechanism that developed to help mother and baby in some way,’ he said.Other evidence suggests women with hyperemesis have a lower risk of miscarriage, but this does not guarantee it will not happen.Researchers from Norway found the daughters of mothers who had been affected were also more likely to suffer extreme sickness.

They claim it may not be a genetic problem that is passed down the generations, but instead caused by shared factors such as diet, exposure to infections or even lifestyle choices that are common to mothers and daughters.Annette Briley, midwife at pregnancy research charity Tommy’s, said: ‘Hyperemesis gravidarum is relatively rare and much more severe than the nausea and vomiting that a lot of women experience during pregnancy.’It is very distressing and anyone worried about it should seek medical help.’ – Dailymail