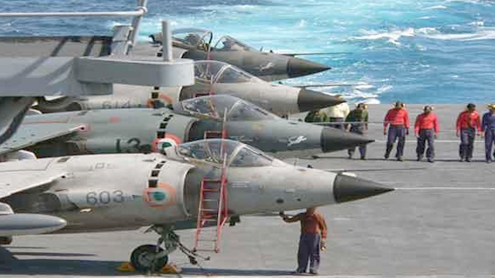 NEW DELHI: The Indian navy is prepared to deploy vessels to the South China Sea to protect India’s oil interests there, the navy chief said on Monday amid growing international fears over the potential for naval clashes in the disputed region.

India has sparred diplomatically with China in the past over its gas and oil exploration block off the coast of Vietnam. China claims virtually the entire mineral-rich South China Sea and has stepped up its military presence there. Other nations such as Vietnam, Philippines and Malaysia have competing claims.Indian state-run explorer Oil and Natural Gas Corp. (ONGC) has a stake in a gas field in the Nam Con Son basin, off Vietnam’s south coast.

Indian Navy Chief Admiral D.K Joshi said while India was not a claimant in the dispute over territorial rights in the South China Sea, it was prepared to act, if necessary, to protect its maritime and economic interests in the region.“When the requirement is there, for example, in situations where our country’s interests are involved, for example ONGC … we will be required to go there and we are prepared for that,” Joshi told a news conference.
“
Now, are we preparing for it? Are we having exercises of that nature? The short answer is yes,” he said.He described the modernization of China’s navy as “truly impressive” and acknowledged that it was a source of major concern for India.Any display of naval assertiveness by India in the South China Sea would likely fuel concern that the navies of the two rapidly growing Asian giants could be on a collision course as they seek to protect trade routes and lock in the supply of coal, minerals and other raw material from foreign sources.

“It is one of the most important international waterways and freedom of navigation there is an issue of utmost concern to India because a large portion of India’s trade is through the South China Sea,” said Brahma Chellaney, analyst at the Center for Policy Research, New Delhi.Chellaney, however, played down Joshi’s comments, saying the Indian navy’s focus would remain on the Indian Ocean, which the Asian nation views as its strategic backyard.

In September 2011, an Indian warship sailing in the South China Sea to the Vietnamese port of Haiphong was challenged when a caller identifying himself as an official of the Chinese navy warned the ship on an open radio channel that it was entering Chinese waters.Nothing happened, the ship sailed on, and both India and China have since played down the incident, with New Delhi saying the vessel was well within international waters in the South China Sea and that there was no confrontation.

China’s neighbors are fretting about a recent Chinese media report on new rules that will allow police in the southern Chinese province of Hainan to board and seize control of foreign ships which “illegally enter” its waters from Jan. 1.The Philippines on Saturday condemned the Chinese plan as illegal and Singapore, home to the world’s second-busiest container port, said on Monday it was concerned.Asked about the report of China’s plan to board ships, Joshi said India had the right to self-defense.Estimates for proven and undiscovered oil reserves in the South China Sea range as high as 213 billion barrels of oil, the US Energy Information Administration said in a 2008 report. That would surpass every country’s proven oil reserves except Saudi Arabia and Venezuela, according to the BP Statistical Review. – Arabnews