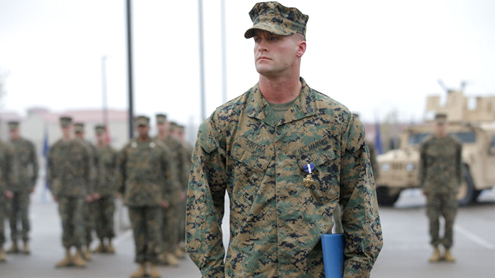 CAMP PENDLETON, Calif: Navy Secretary Ray Mabus on Monday honored four members of a Marine special operations team in a rare public ceremony for those who have served in the covert forces.

In a ceremony at Camp Pendleton, Calif., Mabus awarded Marine Sgt. William Soutra Jr. the Navy Cross, the Navy’s highest honor and the military’s second highest honor, for tending to the wounded while guiding the platoon to safety during an attack in Afghanistan’s Helmand Province in July 2010 that spanned over two days.Three others on his team, including a Navy corpsman, were given Silver Stars.Often the heroic actions of those on special operations teams are only known to each other and the leadership because of their covert work on classified missions.

“This is a chance to recognize people who don’t get recognized much,” Mabus said.Soutra was a canine handler with a Marine special operations team when they were ambushed. After the team’s assistant leader was fatally wounded by an enemy explosive during the ambush, Soutra jumped into action, repeatedly running into the line of fire as he helped direct troops to defend themselves and fight off the enemy, Mabus said.At one point, the 27-year-old Marine from Worcester, Mass., placed a tourniquet on a wounded commando, before dragging him to a ditch for cover. He worked tirelessly for more than an hour after the initial blast and helped carry casualties through the sporadic gunfire, officials said.

His military dog stayed attached to his side during the ordeal. The dog had to be put down more than a year ago because it had cancer.Maj. James Rose, Staff Sgt. Frankie Shinost Jr. and Navy Corpsman Patrick Quill were given Silver Stars for their actions that day.The four men called it a horrible day because they lost their element leader, Staff Sgt. Chris Antonik.”Every day I think about Chris,” said Soutra, calling him a close friend and great warrior.Soutra vowed to try to carry on as the kind of warrior that would make Antonik proud. – Yahoonews