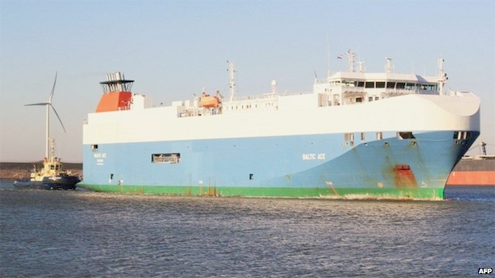 Four sailors are dead and another seven are missing after a cargo ship sank in the North Sea following a collision.

The accident took place off the coast of Belgium and the Netherlands, after the Baltic Ace sailed from Zeebrugge.Thirteen crew members of the Baltic Ace have been rescued, but seven are still missing in freezing waters.A coastguard spokesman said “the chance of finding anyone alive now is virtually zero” and the search was halted for the night.”We are doing all we can, but time is overtaking us,” Peter Verberg told the Associated Press news agency.

Strong winds and high seas made conditions difficult, and the search was called off at 02:00 (01:00 GMT).A decision will be taken at dawn on whether to resume the search.The 148-metre (485-foot) Baltic Ace was sailing under a Bahamas flag and carrying cars from Zeebrugge in Belgium to Kotka in Finland.Its 24 crew abandoned ship as it sank quickly after colliding with the Cyprus-registered container ship, the Corvus J, sailing from Grangemouth in Scotland to the Belgian port of Antwerp.

The 134-meter Corvus J is said to be badly damaged but not in danger of sinking. All 12 crew members are still on board.The Dutch coastguard said the cause of the collision, which happened at 18:15 GMT some 65 km (40 miles) off the coast of the southern Netherlands, was not yet known.”We have found life rafts, and the people in them are being picked up by helicopters,” said Mr Verburg.The shipping lane where the accident happened is one of the busiest in the North Sea, about 100km (60 miles) from Europe’s busiest port, Rotterdam.But a spokesman for the port said its activities would not be affected by the collision. – BBC