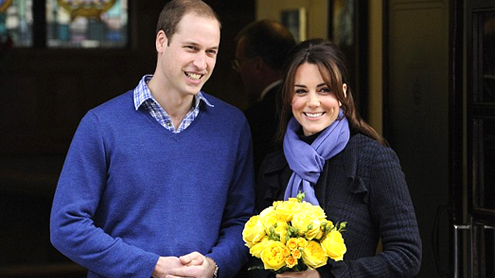 The pregnant Duchess of Cambridge smiled this morning as she left hospital after four days of treatment for acute morning sickness, telling reporters outside: ‘I’m feeling much better thank you’.

She was discharged from the King Edward VII Hospital in central London following three nights under observation and will now head to Kensington Palace for a period of rest, St James’s Palace said.Kate, 30, emerged from the private hospital looking relaxed, carrying a bouquet of yellow flowers and giving a brief smile to the waiting press before being driven away with her husband Prince William.The Duchess’s appearance came as the furore over the hoax call that duped a nurse into revealing details about her health continues.

The two Australian radio DJs who impersonated the Queen and the Prince of Wales to dupe hospital staff into giving a condition update on Kate have been promoting their stunt on Twitter.The 2Day FM presenters, Mel Greig and Michael Christian, apologised for their actions, as did their radio station.But Christian has tweeted a web address where listeners can hear the broadcast featuring the hoax Queen and Charles being told about the health of the Duchess, who is being treated for severe morning sickness.

In his tweet, the presenter said: ‘Still haven’t heard the £RoyalPrank that has the world talking? Listen to it here…’William, casually dressed in a dark top and matching trousers, arrived at the hospital at 10.15am and walked into London’s King Edward VII hospital without acknowledging the waiting press.The hospital’s chief executive, John Lofthouse, said he regretted the hoax call breach of security, but condemned it as ‘journalistic trickery’.

Mr Lofthouse said: ‘I think this whole thing is pretty deplorable. Our nurses are caring, professional people trained to look after patients, not to cope with journalistic trickery of this sort.’He said there was no chance the Duchess could have received the call, adding: ‘Technically, I think this was a breach of patient confidentiality, which I very much regret.‘Having said that, the information which was inadvertently revealed is already in the public domain.’ – Dailymail

Bubba in Thailand to win

Bubba in Thailand to win