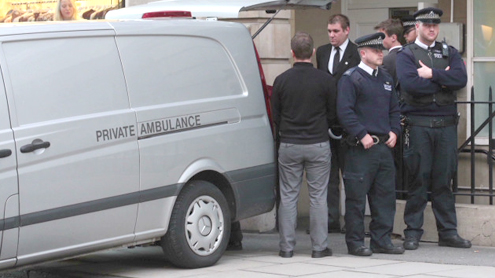 London: A nurse at the hospital who was duped by a prank call from two Australian radio DJs concerning Prince William’s pregnant wife, Catherine, has apparently committed suicide, the hospital confirmed Friday.

The nurse “was recently the victim of a hoax call,” King Edward VII Hospital said in a media statement.The DJs impersonated Queen Elizabeth II and Prince Charles in the prank call, in which some details of the Duchess of Cambridge’s condition and care were given.The nurse who died was the person who first took the hoax call and transferred it through to Catherine’s ward, the hospital’s public relations company said.The hospital named her as Jacintha Saldanha and said she had worked there for more than four years as an “excellent nurse,” well-respected by co-workers.

The hospital “had been supporting her throughout this difficult time,” the statement said.She is survived by her husband and two children, the hospital said.Her family released a statement asking for privacy and directing questions to police.Social media entwined in radio prank, suicide story.”We as a family are deeply saddened by the loss of our beloved Jacintha,” said the statement, released by police.

As the hoax controversy unfolded, authorities weren’t releasing to British media the name of the nurse victimized in the prank. Her name became public only after her death.The Duchess of Cambridge was discharged from the hospital Thursday after treatment for acute morning sickness.A St. James’s Palace spokesman said: “The Duke and Duchess of Cambridge are deeply saddened to learn of the death of Jacintha Saldanha.”Their Royal Highnesses were looked after so wonderfully well at all times by everybody at King Edward VII Hospital, and their thoughts and prayers are with Jacintha Saldanha’s family, friends and colleagues at this very sad time.”

Separately, a palace spokesman told CNN: “At no point did the palace complain to the hospital about the incident. On the contrary, we offered our full and heartfelt support to the nurses involved and hospital staff at all times.”The hospital’s chief executive, John Lofthouse, said, “Everyone is shocked by the loss of a much loved and valued colleague.”London’s Metropolitan Police said they were notified around 9:35 a.m. (4:35 a.m. ET) on Friday that a woman was found unconscious. She was pronounced dead at the scene.

Police are treating the death as “unexplained,” they said.Audio of the call posted online suggested a woman spoke briefly to the DJs, who host a show for the 2Day FM radio station in Sydney, before the call was put through to the ward early Tuesday morning.The hospital said Wednesday that it deeply regretted the call had been put through.The hospital is known for treating royals. In June, Prince Philip, 91, was admitted to the same hospital with a bladder infection, forcing him to miss part of the queen’s Diamond Jubilee celebration.

The radio show apologized for the call Wednesday, saying it “was done with light-hearted intentions.”The show was known for its irreverent humor, aimed at a young, mainly female demographic. The hosts were devoted to gossip and pranks.Its two DJs, Mel Greig and Michael Christian, continued to tweet about the call on Thursday and earlier Friday, promising “more on the #royalprank.”

Talking about the call on air Thursday, Greig said: “They were the world’s worst accents ever. We were sure 100 people at least before us would’ve tried the same thing. … We were expecting to be hung up on — we didn’t even know what to say when we got through.”Some listeners applauded the prank, like one who identified himself as Guido on the station’s Facebook page and wrote, “It is only a joke people! it was great i love it!!!”

Others were outraged, with such negative views outnumbering positive ones on 2DayFM’s before the nurse’s death.”Your stunt was done at a time in this country where there is paranoia about the intrusion of the media into people’s lives,” Gary Slenders wrote. “I know you will say it is harmless fun, the management of 2DayFM will say that it won’t happen again, but this exactly where the phone hacking scandal started.”

The outcry grew exponentially after Saldanha’s death, leading the Coles supermarket chain to remove all its advertising from 2Day FM in response.By Friday evening, a spokeswoman for the station told CNN in a statement that the pair will “not return to the show until further notice out of respect for what can only be described as a tragedy.” She said Greig and Christian — whose Twitter accounts have been taken down — were “deeply shocked” by the incident.

Rhys Holleran, CEO of the Southern Cross Austereo media group, echoed those facts and views in a press conference Saturday afternoon, saying the company and DJs “mutually decided” they would be off the air for an undetermined period.Holleran said he’d spoken with Greig and Christian on Saturday morning, and they were “deeply shattered” and “our concern is for their welfare.” The CEO added that he is “very confident that we haven’t done anything illegal.”

“This is a tragic event that could not have been reasonably foreseen and we are deeply saddened by it,” he said of Saldanha’s death.That view isn’t shared by everyone. 2Day FM’s Facebook page, for instance, contained a number of angry comments after news of the nurse’s death broke.”This death is on your conscience,” reads one post. Another says, “Blood on your hands.”A person using the name Riz wrote, “This pair have undone all the good work Australia have done in the last century. The Australian people should be outraged at the pair of them.”They’ve brought disgrace on your country – and the whole world knows it!” – CNN