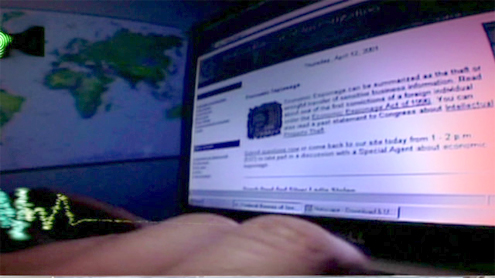 Washington: It might remind you of the new smash-hit James Bond movie “Skyfall”, in which the villains steal a device with top secret information on the identities of British agents.

But in this case, sensitive data was left on a subway train.Law enforcement and congressional sources tell CNN a contractor working for the U.S. Secret Service accidentally left a pouch containing two computer backup tapes on a train in Washington’s Metrorail subway system.The tapes contained very sensitive Secret Service personnel and investigative information, and if accessed could be highly damaging, according to sources.

The contractor was transporting the pouch from Secret Service headquarters in Washington to a now-closed data facility in Maryland. The sources say the contractor got off a Metro train, and later realized the pouch had been left behind. The Secret Service and the Metro police were contacted, and an aggressive search took place.According to one source, the tapes have not been recovered.

The incident occurred nearly five years ago, in February 2008. It is now the subject of an investigation by the Department of Homeland Security’s Office of Inspector General, according to a congressional source.That office would not comment on why the investigation is taking place now, or on any other aspect of the investigation.Eric O’Neill, a former FBI counterespionage agent, said, “Some of the information could cause lives to be at risk, if someone wanted to get at the families of a high-level government worker or someone they perceived as being someone who could work against, say, a terrorist cell.”

O’Neill is the agent who took down Robert Hanssen, an FBI official who spied for the Soviet Union and Russia in the 1980s and 1990s.The Secret Service says no lives were put at risk, and no fraud was committed as a result of the loss.But why would the agency put sensitive information on a removable set of tapes?”Part of the reason, I think … is that in 2008 when this occurred, some of the information might have been on removable discs because that’s how they transported information,” O’Neill told CNN. “We’ve leapt forward in technology since then.”

The Secret Service issued a statement acknowledging the loss of information.”These back-up tapes were not marked or identified in any way and were protected by multiple layers of security.,” it said. “They could not be accessed without the proper equipment, applications and encoding.”There is conflicting information on whether the tapes were encrypted.

O’Neill, a partner at the security firm The Georgetown Group, says even if they were, “this is 2008 encryption. And years later, our abilities to break encryption, our algorithms to do that, are much, much better. If those tapes were found, I’m sure they could be cracked in moments.”A Secret Service official did not provide the name of the individual who left the tapes on the train, or the name of the contracting firm.

The official would not comment on whether the individual was disciplined, and said he is not sure if the agency still does business with the firm.O’Neill has his own questions about the incident.”Why did a contractor have it?” he asks.”Why wasn’t it chained to his wrist with a handcuff in a case that he would, the second he stood up, think ‘I need to grab it’?”Asked those questions by CNN, a Secret Service official did not answer directly, but instead referred to part of the agency’s statement saying, “Subsequent to this incident the Secret Service instituted protocols to prevent this from happening again.” –