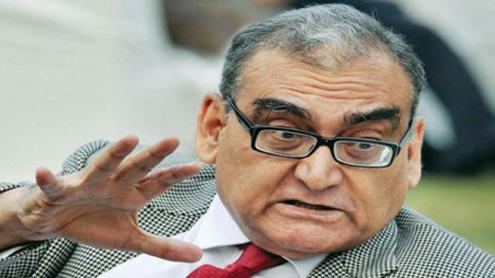 NEW DELHI: At least 90 per cent of Indians are idiots who can easily be misled by mischievous elements in the name of religion, Press Council of India (PCI) chairperson Justice Markandey Katju said Sunday, reports Times of India.

“I say 90 per cent of Indians are idiots. You people don’t have brains in your heads….It is so easy to take you for a ride,” he said at a seminar in New Delhi.He said that a communal riot could be incited in Delhi for as meagre an amount as Rs 2,000. He said all somebody has to do is make a mischievous gesture of disrespect to a place of worship and people start fighting each other. “You mad people will start fighting amongst yourself not realising that some agent provocateur is behind this,” he said.Justice Katju said that before 1857 there was no communalism in the country but the situation is different now.

Today 80 per cent Hindus are communal and 80 per cent Muslims are communal. This is the harsh truth, bitter truth that I am telling you. How is it that in 150 years you have gone backwards instead of moving forward because the English kept injecting poison,” Justice Katju said. “The policy that emanated from London after the mutiny in 1857 that there is only one way to control this country that is to make Hindus and Muslims fight each other,” he said.He said then there was propaganda that Hindi was the language of Hindus and Urdu of Muslims. “Our ancestors also studied Urdu, but it is so easy to fool you. You are idiots, so how difficult is it to make an idiot out of you,” he said.Mr Katju said that he was saying these harsh things to make Indians, whom he loved to understand the whole game and not remain fools. – Nation