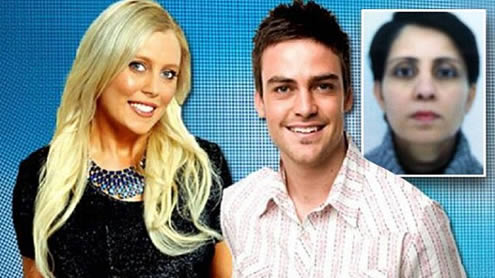 With tears streaming down her face, radio DJ Mel Greig told for the first time early today of her horror at hearing the news that a nurse had committed suicide days after her prank call.

The pair described themselves as ‘shattered, gutted, heartbroken’ in an emotionally-charged interview due to be shown in full on Australian TV later this morning. ‘The first thing I asked was: “Was she a mother?”‘ Miss Greig said in an interview she and co-host Michael Christian gave in Sydney.

Jacintha Saldanha, a 46-year-old mother of two, was found dead on Friday morning – 48 hours after the broadcast of an early-morning prank call in which Miss Greig and Michael Christian, two Australian DJs, posed as the Queen and Prince of Wales. The DJs were attempting to reach the Duchess of Cambridge, who was admitted to hospital with severe morning sickness after it was revealed she was pregnant. Mrs Saldanha put the call through to Kate’s ward at the King Edward VII Hospital in central London, where an unnamed colleague gave details of the duchess’s treatment for severe morning sickness.

The pair said they believed they would never get past the switchboard and wanted to be hung up on. Instead, to their absolute astonishment, they fooled experienced nurse Jancintha Saldanha into putting them through to the nurse treating the Duchess of Cambridge. In a partial transcript of the duo’s pre-recorded interview with A Current Affair, screening on Australian television shortly, a tearful Mel Greig, who impersonated the Queen in the prank call, said: ‘I’ve thought about it a million times. I want to reach out to them and just give them a big hug and say “Sorry”.’ ‘I hope they’re OK. I really do.’

Mr Christian said he hoped Ms Saldanha’s family get the love, support and care that they need. Miss Greig was shown in a brief preview clip with her mascara running down her face as she tearfully recounts the entire events that have resulted in her and Christian being inundated with savage comments about their behaviour. They are both receiving counselling in case they attempt self harm. Greig added that hearing of the nurse’s death ‘was the worst phone call I have had in my life.’ She went on: ‘There is not a minute that goes by where we don’t think about her family and what they must be going through.

‘The thought that we may have played a part in that is gut wrenching.’ She said phoning the hospital was such a silly idea and not for a second did they expect to speak to Kate or anyone else at the hospital. It was revealed today that the family of the tragic nurse believe she died of shame. Mrs Saldanha’s brother Naveen told the Daily Mail that his devoutly Catholic sister was a ‘proper and righteous person’. She would have been ‘devastated’ at unwittingly assisting a colleague in breaching medical confidentiality over the condition of the Duchess of Cambridge.

‘She would have felt much shame about the incident,’ he said. A recording of the conversation with Mrs Saldanha was broadcast on the 2Day FM station with the DJs gleefully boasting about their successful hoax. Yesterday they were in hiding as the worldwide backlash against their action grew. Mrs Saldanha, whose husband Benedict Barboza is an NHS accountant, moved to the UK ten years ago from Mangalore in south-west India. In Mangalore yesterday, her sister-in-law Celine Barboza said the family could not understand what had caused the ‘strong’ mother of two apparently to end her life.

‘We just cannot believe what has happened,’ she said. ‘She was a very strong person and couldn’t have taken this drastic step easily. We would like to get an answer.’ Another sister-in-law, Irene Barboza, said: ‘She used to call us very regularly and was like our fourth sister. ‘But she told no one in the family about the prank call that has been blamed for driving her to suicide.’ The nurse’s 49-year-old husband said he was ‘devastated’ by her death while her 14-year-daughter Lisha posted on Facebook ‘I miss you. I love you.’ They and her 16-year-old son Junal were said to be ‘shocked and inconsolable’. The family live in Southmead, Bristol, and Mrs Saldanha stayed in nurses’ quarters in London during her shifts at the hospital.

Her mother-in-law, 85-year-old Carmine Barboza, wept as she told of the moment she heard of Mrs Saldanha’s death from her son. ‘He was crying and couldn’t speak much,’ she said. ‘I want to know about the circumstances of her death and nobody is giving me an answer. She used to stay at the nurses’ quarters and go home to be with her children on her days off, so now I don’t know who will look after my grandchildren.’ She added that the family were desperate to bring Mrs Saldanha’s body back to India to perform the last rites in the Catholic tradition. ‘Nobody is telling me any information about her and whether her body is being brought to India.’ A neighbour said: ‘What these Australian guys did is not acceptable. Their prank has killed our beloved Jacintha. Her death should be blamed on them.’

‘She must have been embarrassed and under a lot of mental trauma because of those two people, otherwise she wouldn’t have taken such an extreme step of killing herself.’ After visiting Mrs Saldanha’s family at their home, MP Keith Vaz said a memorial service was being planned for next week and the King Edward VII Hospital had set up a memorial fund in her name. Although she was not blamed in any way for what happened, friends said Mrs Saldanha ‘took it very badly’ and was extremely ‘traumatised’.

Described as popular, quiet and ‘profoundly caring’, she is said to have made clear to her family the depth of her anxiety when the prank was broadcast. The hospital’s chairman, Lord Glenarthur, has accused Sydney-based 2Day FM of ‘humiliating two dedicated and caring nurses’ and demanded that it review its editorial guidelines. The station’s chairman, Max Moore-Wilton, described the events of the past few days as ‘tragic’, but added: ‘As we have said in our own statements, the outcome was unforeseeable and very regrettable.’

Julia Gillard, the Australian Prime Minister, described the incident as a ‘terrible tragedy’. The hospital has repeatedly stressed that Mrs Saldanha did not face any disciplinary action and it ‘was working hard to support her’ but the feeling that she had unintentionally broken the hospital rules, bringing shame on her and her employer, may well have pushed her into taking desperate action. Her fellow victim of the prank, who has not been named, is also said to have been ‘incredibly upset’. Yesterday a special Mass was said at St Vincent de Paul Presbytery in Southmead, just 200 yards from Mrs Saldanha’s home Father Tominnegan said: ‘She was a very caring wife, a very loving mother and a gentle friend and neighbour who regularly attended church here. ‘People are saddened – it is still all very raw. She was well known and well liked in the community and she will be a loss. She felt especially privileged to work in the hospital in London – everyone is deeply shocked and saddened.’ – Dailymail