McAfee wants to return to US, ‘normal life’ 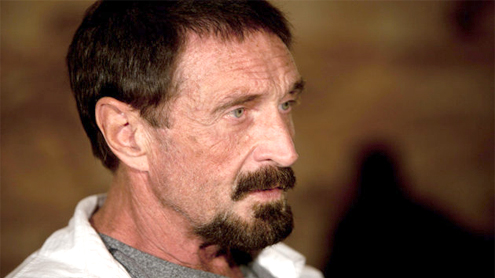 McAfee wants to return to US, 'normal life'

Mexico: Software company founder John McAfee said Sunday he wants to return to the United States and “settle down to whatever normal life” he can.

In a live-stream Internet broadcast from the Guatemalan detention center where he is fighting a government order that he be returned to Belize, the 67-year-old said “I simply would like to live comfortably day by day, fish, swim, enjoy my declining years.”Police in neighboring Belize want to question McAfee in the fatal shooting of a U.S. expatriate who lived near his home on a Belizean island in November.The creator of the McAfee antivirus program again denied involvement in the killing during the Sunday Internet video hook-up, during which he answered what he said were reporters’ questions.

His comments were sometimes contradictory. McAfee is an acknowledged practical joker who has dabbled in yoga, ultra-light aircraft and the production of herbal medications.The British-born McAfee first said that returning to the United States “is my only hope now.” But he later added, “I would be happy to go to England, I have dual citizenship.”He was emphatic that “I cannot ever return to Belize …. there is no hope for my life if I am ever returned to Belize.”

“If I am returned,” he said, “bad things will clearly happen to me.”He descibed the health problems that had him briefly hospitalized earlier this week after Guatemalan authorities detained him for entering the country illegally. He apparently snuck in across a rural, unguarded spot along the border.”I did not eat for two days, I drank very little liquids, and for the first time in many years I’ve been smoking almost non-stop,” he said. “I stood up, passed out hit my head on the wall, came to,” though he now said he was feeling better.

McAfee praised the role his 20-year-old Belizean girlfriend, Samantha Vanegas, played in his escape from Belize, where he claims he is being persecuted by corrupt politicians. Authorities in Belize deny that they are persecuting him and have questioned his mental state.”Sam saved the day many times” during their escape, he said, and suggested he would take her with him to the United States if he is allowed to go there.

He confirmed that journalists from Vice magazine who accompanied him on his escape after weeks of hiding in Belize had unwittingly posted photos with embedded data that revealed his exact location.”It was an error anyone could make,” he said, noting they were under a lot of pressure at the time.McAfee has led an eccentric life since he sold his stake in the anti-virus software company named after him in the early 1990s and moved to Belize about three years ago to lower his taxes.

He told The New York Times in 2009 that he had lost all but $4 million of his $100 million fortune in the U.S. financial crisis. However, a story on the Gizmodo website quoted him as describing that claim as “not very accurate at all.”McAfee’s Guatemalan attorney, Telesforo Guerra, says that he has filed three separate legal appeals in the hope that his client can stay in Guatemala, where his political asylum request was rejected.Guerra said he filed an appeal for a judge to make sure McAfee’s physical integrity is protected, an appeal against the asylum denial and a petition with immigration officials to allow his client to stay in this Central American country indefinitely.

The appeals could take several days to resolve, Guerra said. He added that he could still use several other legal resources but wouldn’t give any other details.Fredy Viana, a spokesman for the Immigration Department, said that before the agency looks into the request to allow McAfee to stay in Guatemala, a judge must first deal with the appeal asking that authorities make sure McAfee’s physical integrity is protected.

“We won’t look into (allowing him to stay) until the other appeal is resolved,” Viana said. “The law gives me 30 days to resolve the issue.”McAfee went on the run last month after Belizean officials tried to question him about the killing of Gregory Viant Faull, who was shot to death in early November.McAfee acknowledges that his dogs were bothersome and that Faull had complained about them, but denies killing Faull. Faull’s home was a couple of houses down from McAfee’s compound in Ambergris Caye, off Belize’s Caribbean coast. – Yahoonews

Tags: Belizean islandMcAfee wants to return to US
Previous Post