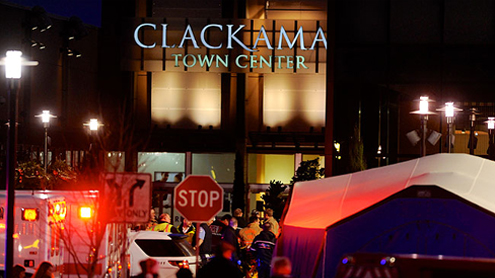 Witnesses described a scene of chaos and disbelief as a gunman wearing some sort of camouflage outfit and what looked like a hockey mask fired rounds fire from a military-style rifle near the food court at Clackamas Town Center.Parents with children joined other shoppers rushing to stores’ backrooms for safety as teams of police officers began entering the mall to find the shooter.Clackamas County sheriff’s Lt. James Rhodes said later that the gunman was dead, apparently from a self-inflicted gunshot wound. A shopper told KATU-TV he saw a man lying on the floor with a gun next to him.

Authorities went store-to-store to confirm that there was only one shooter and to escort hiding shoppers outside, Rhodes said.Austin Patty, 20, who works at Macy’s, said he saw a man in a white mask carrying a rifle and wearing a bulletproof vest.He heard the gunman say, “I am the shooter,” as if announcing himself, Patty said. He then fired several shots paced seconds apart.A series of rapid-fire shots in short succession followed. Patty said he ducked to the ground and then ran.

His Macy’s co-worker, Pam Moore, told The Associated Press the gunman was short, with dark hair, and dressed in camouflage.”I heard about 20 shots and everyone hit the ground,” Moore said. “That’s when we all just ran.”Witnesses said the mall’s Santa Claus was among those who ducked for cover.The mall is one of the Portland area’s busiest. It’s in a middle-class area that has become popular with families as falling real estate prices have put its homes just a few miles from downtown Portland within financial reach.

The mall has about 185 stores and a 20-screen movie theater among anchor tenants that also include Nordstrom and J.C. Penney. Sheriff’s deputies said it would remain closed during the investigation of the shooting, but it wasn’t clear how long that would take.Shaun Wik, 20, from Fairview, said he was Christmas shopping with his girlfriend Tuesday and opened a fortune cookie at the food court. Inside was written “live for today, remember yesterday, think of tomorrow.”

As he read it, he heard three shots. He heard a man he believes was the gunman shout, “Get down!” but Wik and his girlfriend ran. He heard seven or eight more shots. He didn’t turn around.”If I had looked back, I might not be standing here,” Wik said. “I might have been one of the ones who got hit.”Kira Rowland told KGW-TV that she was shopping at Macy’s with her infant son when the shots started.”All of a sudden you hear two shots, which sounded like balloons popping,” Rowland told the station. “Everybody got on the ground. I grabbed the baby from the stroller and got on the ground.”

Rowland said she heard people screaming and crying.”I put the baby back in the stroller and ran like hell,” Rowland said. “It was awful. It was shots after shots after shots like a massacre.”Holli Bautista, 28, said she was shopping in the Macy’s for a Christmas dress for her daughter when she heard pops that sounded like firecrackers.”I heard people running and screaming and saying ‘Get out, there’s somebody shooting,'” she told the AP. “It was a scene of chaos.”

She said hundreds of shoppers and mall employees started running, and she and dozens of other people were trying to escape through an exit in the department store.Bautista said the Macy’s opens into the food court area, where it was reported the shootings took place. Bautista said it sounded like the shots were coming from that direction.Tiffany Turgetto and her husband had exited Macy’s through the first floor when they heard the gunshots coming from the second floor of the mall.”People in front of us people were dropping, finding covering,” she told the AP. “People were yelling screaming and gasping, yelling to get out.

“The lady next to us, she threw a chair and started running. We couldn’t run because the chair was there.”Turgetto and her husband and other people were able to quickly leave through a Barnes & Noble bookstore before the police arrived and locked down the mall.”I had left my phone at home. I was telling people to call 911. Surprisingly, people are around me, no one was calling 911. I think people were in shock.”Kaelynn Keelin was working at two stores down from Macy’s when the gunfire began and watched windows to another store get shot out.She and her Made in Oregon co-workers ran to get customers inside the store to take shelter, Keelin said.”We got lucky we stayed in,” she said. “If we would have run out, we would have ran right into it.” – Yahoonews