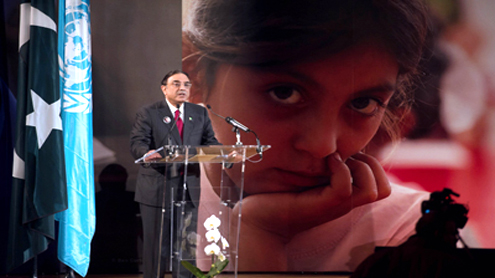 PARIS: President Asif Ali Zardari on Monday called for forging a grand alliance of the governments, donors, politicians, academics, private and public sectors for promoting cause of education and to ensure that every child not only in Pakistan but across the world received quality education.

Addressing a high-level event supporting girls’ education here at the UNESCO headquarters on the International Human Rights Day, the President called upon the international community to join hands, pool efforts and form a grand alliance to place a book in every girl’s hand. He said that such partnership was the way to triumph—a triumph of right over wrong, of light over darkness, of hope over fear.

Thanking the UNESCO for partnering with the Government of Pakistan to hold such a high level event that aims at rallying international support for further promoting the cause of education the President said that the event was held on a day which had special significance in many ways.He said the day marked 67th foundation day of UNO, 64th anniversary of the International Human Rights Day and it was on this day in 1948 that the UN approved the Universal Declaration on Human Rights, which made the world realize that democracy was the best means to ensure that everyone has access to basic rights, freedom of speech, association, and personal security and dignity.

The President noted that the nations that have progressed ensured maximum rights to their citizens and provided universal access to education to their men and women. It is no coincidence that these are all democratic nations, he continued.The President said, “progress of these nations has taught us an important lesson. It has taught us that democracy and progress take time and, need political commitment. It also needs sacrifices.”The President while underscoring the sacrifices of the people for the cause of democracy said that Pakistan’s democratic government was about to complete its term for the first time in the history.

“As we complete our term our commitment to democracy has also increased. And so has our confidence to deliver peace and prosperity also increased,” he observed.Paying tribute to Malala for her courage to confront the obscurantist agenda of the militant mindset, the President said that two months ago Malala Yousufzai was attacked by forces of darkness for she was aspiring for education. She aspired for education not only for herself, but for others like her in the country, he said.

The President said, “we are grateful to God for having spared her life. We are also grateful to the international community, for their support to the cause of girls’ right of education.”While referring to steady health progress of Malala, the President said that getting back on her feet, after being shot in the head, demonstrates that it indeed is a battle between good and evil and between the forces of light and the forces of darkness.
He said that while democracy’s agenda is peace and progress the agenda of the extremists is death and destruction.

The President said, “Malala’s survival teaches us that extremism can best be fought through collective action.”“Our resolve, to provide education to all, in particular to the millions of out-of-school girls is the best strategy to defeat extremism.”The President also quoted UN Secretary General who recently remarked that “What makes the extremists fear, is the sight of a girl with a book in her hand” and emphasized upon joining hands and focus on placing a book in every girl’s hand.

The President said that extremists were not only seeking to hamper the progress of the nation but were also abusing the name of Islam, a religion of peace, which puts education, and learning before everything less.He said that the first word, of the first verse of the Holy Quran, revealed upon Prophet Muhammad (Peace Be Upon Him), was Iqra, which means, read.

The President on this occasion also highlighted that the country took a giant leap forward in quest of education and knowledge two years ago and all the political parties and provinces decided to make fundamental changes in the Constitution so as to make education for all girls and boys, between 5 to 16 years, as fundamental right.The President also highlighted various challenges with regards to education sector in Pakistan.He said that in a population of around 200 million, 36% was under the age of 15. He said that out of over 50 million school-age children, only about half of them go to school.The President said, “We fully realize the enormity of the challenge.

We also possess the vision, and resolve to address it.  Our vision hinges on democracy and political commitment at home. It also hinges on seeking support of the international community.”The President said, “our vision for an educated Pakistan was linked to a democratic, peaceful and progressive Pakistan.”He said that long term democratic political commitment was a key to reforms in education.He said that over the past three decades the democratic process was repeatedly derailed. The priorities shifted away from social and human development.

It is part of the Benazir Income Support Program, a program of poverty alleviation and women empowerment. He said that the Program will send some three million girls to school.“But we have still to cover a great distance.”The President said that just like the support by the Friends of Democratic Pakistan, the country needs global support for education.He said that Pakistanis were a resilient and a determined nation and they neither shy away from hard work nor from the sacrifices. He said that Pakistanis need the support of the international community in helping every Malala go to school.

The President in his remarks also appreciated UNESCO for its call for Education for All.  While lauding UN Secretary General’s initiative of “Education First”, the President observed that the United Nations system has a crucial, even central, role to play in overcoming the crisis of education. He said that guided by its principles, and high ideals of its Charter, the UN was fated to succeed. Pakistan, the President reiterated, will continue to uphold these ideals, and values of the UN. Together, we shall succeed, the President said.

Quoting former Prime Minister Shaheed Mohtarma Benazir Bhutto who once had said that “Time and Justice is on our side”, the President said, “I hope that together we will succeed in the cause of girls’ education.”The President thanked Director General Ms. Irina Bokova for co-hosting the Malala event and also UNESCO and its continued support.The President, on the occasion also announced $10 million contribution in the Malala’s Fund for Education. – APP