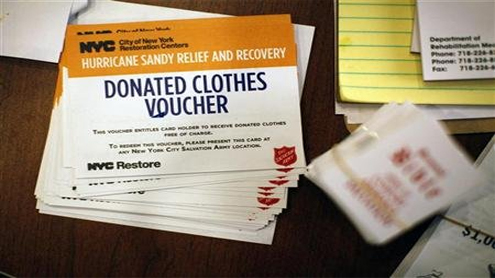 WASHINGTON: Senate Democrats are moving quickly to push through the Obama administration’s full request for $60.4 billion in emergency aid for Superstorm Sandy, but a growing number of Republicans are arguing for a smaller initial amount.

The Senate Appropriations Committee released the text of its bill on Wednesday, which seeks to aid East Coast states hit hard when Sandy came ashore on Oct 29. Democratic aides said they are working towards final passage of the measure by early next week.The quick turnaround effort appeared aimed at gaining the initiative over Republicans who want a slower, more cautious approach, passing appropriations only as the money is needed.

The Congressional Budget Office, in a new report on Obama’s $60.4 billion request, estimated that only about $8.97 billion of the total would be spent in 2013, with another $12.66 billion spent in 2014 and $11.59 billion spent in 2015.”That means there’s very little reason to pass the whole thing now – especially since there hasn’t been a single hearing on this request,” a senior Republican aide said.

The $60.4 billion request is “more money than the annual budgets for the departments of Interior, Labor, Treasury and Transportation combined,” the aide added, noting those budgets are subject to multiple hearings.Republican Senator Jon Kyl of Arizona said on Tuesday that Obama’s Sandy request was simply “too much.””At $60 billion? In this time when we’re trying to solve the deficit problem?” he told reporters.

The resistance could put the Sandy aid bill at risk of becoming a pawn in the tense negotiations over the year-end “fiscal cliff” of automatic tax hikes and spending cuts, although members of both parties have said it is essential for Congress to approve new disaster relief funds before the end of the year.The Federal Emergency Management Agency’s disaster relief fund now has less than $5 billion available.

The amount in the Senate bill is considerably less than the $82 billion in aid requested by New York, New Jersey and Connecticut, the states that bore the brunt of damage from the storm.New Jersey Governor Chris Christie, a Republican, was in Washington last week, lobbying lawmakers for the larger amount.A senior Senate Democratic aide said a procedural vote on the measure in the Democratic-controlled Senate could take place by Thursday, clearing the way for a final vote as early as Monday.

The Appropriations Committee in the Republican-controlled House of Representatives is still analyzing the Obama request and is considering moving a bill to address immediate needs first.The damage to New York and New Jersey coastal areas was on a scale not seen since Hurricane Katrina slammed the Gulf Coast and flooded New Orleans in 2005. Two weeks after that storm hit, Congress had approved $62.3 billion in emergency appropriations.Lawmakers passed numerous subsequent emergency funding requests over several years to cover Katrina damage that topped $100 billion. – Yahoonews