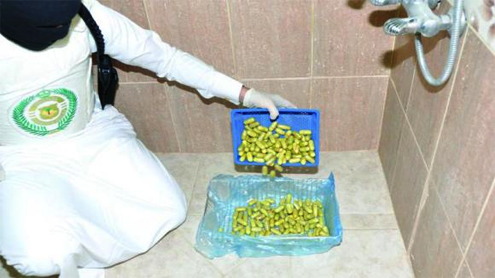 Interior Minister Prince Muhammad bin Naif has approved the national strategic plan to combat drugs, which will be carried out in cooperation with 25 government and private agencies.Abdul Elah bin Muhammad Al-Sharief, assistant director-general of the department for combating drugs, said the plan targets 5 million school and university students.
He said drug barons and mafias were targeting Saudi Arabia. “Saudi security agencies have been successful in foiling many attempts to smuggle drugs into the Kingdom.”

According to a report published by the Interior Ministry recently, it had arrested 634 drug smugglers and traffickers including 207 Saudis during the past three months.Maj. Gen. Mansour Al-Turki, spokesman of the ministry, said the arrested criminals had attempted to smuggle various types of drugs worth SR 886.31 million.Spelling out the different types of drugs seized from smugglers, Al-Turki said they included 7.4 kg of heroin, 10,623 kg of hashish, and more than 1.55 million amphetamine tablets.

The Kingdom’s drug enforcement agency adopts two main ways to contain growing drug smuggling attempts and drug abuse cases: Arrest of smugglers and traffickers in addition to prevention of money laundering and enlightening the public against the dangerous effects of drugs.“Drugs have become one of the major issues facing the world, including many Arab countries, despite the national, regional and international efforts to fight this social evil,” Al-Sharief pointed out.

He said the national anti-drug campaign, “For your sake”, aims at enlightening different groups of people including expatriates on the hazardous effects of drug abuse.“We intend to deepen the religious and moral values among the public to keep them away from drugs and narcotics and inform them about the bad effects of drug abuse on family, society and economy,” Al-Sharief said.The campaign intends to carry out a number of programs including the launch of a website with content in four languages (Arabic, English, Urdu and French) and another program to protect students from drugs.

“This year we intend to target 5 million students in 25,000 schools under 42 education departments for boys and 43 education departments for girls all over the Kingdom,” Al-Sharief said.The department has set up another website (www.wiqaiya.com) providing a lot of information and articles aimed at enlightening the public on the need to keep away from drugs. The website is linked with social media.“We also intend to organize a number of other programs as part of the campaign including a special television program and 13 exhibitions in different regions,” he said.

The department intends to produce 26 video programs, each with the duration of 45 minutes, with the participation of leading football stars and young Saudi soccer fans.“Production of a cartoon film to enlighten students on how to behave nicely at school, home and with family and friends is another project,” he said.The department also intends to distribute 2 million copies of a booklet on the harmful effect of using amphetamine narcotic tablets, heroin and hashish.

“We also intend to hold five youth forums during the year to enlighten young men and women on drug abuse,” he said.Other programs include a regional symposium, a workshop for preventive measures, a major awareness program to be initiated by regional governors with the support of universities, 30 television series and a special program for women in nine regions including Makkah, Madinah, Riyadh, Qassim and Asir.In an article published on wiqaiya.com website, Makkah Deputy Gov. Abdul Aziz Al-Khodairy highlighted the harmful effects of drugs on individuals, families and society.

“We need cooperation of all members of society, especially young men and women, to prevent drug smuggling and sales. If smugglers and traffickers see remarkable decrease in demand for drugs, they will stop bringing them to the Kingdom,” he pointed out.Al-Khodairy cautioned students against the tricky methods used by drug agents to sell narcotic tablets like amphetamine, especially during examination times. He urged Saudi youth to take the lead role in fighting drugs and save the society from this danger. – Arabnews