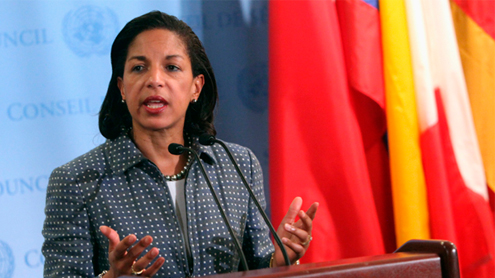 Currently the US envoy to the United Nations, Ambassador Rice was widely seen as a top prospect to replace Secretary of State Hillary Rodham Clinton, who is retiring at the end of Mr. Obama’s first term. But her star was tarnished in September after she made erroneous statements on TV about the attack on the US consulate in Benghazi, Libya, which took the lives of four Americans, including Ambassador Christopher Stevens.

High-profile Republicans, including Sen. John McCain of Arizona, had promised a major fight if Obama had sent her name to the Senate for confirmation. By accepting her withdrawal, Obama has avoided expending political capital in trying to get her through the Senate, and also avoided refocusing the national spotlight on what went wrong in Benghazi.RECOMMENDED: Five ways events overseas could shape Obama’s second term

“If nominated, I am now convinced that the confirmation process would be lengthy, disruptive, and costly – to you and to our most pressing national and international priorities,” Rice wrote in a letter to Obama and obtained by NBC News. “That trade-off is simply not worth it to our country…. Therefore, I respectfully request that you no longer consider my candidacy at this time.”

The White House released a statement from the president indicating that he had spoken with Rice, and accepted her request to remove her name from consideration. He lauded her service as “an extraordinarily capable, patriotic, and passionate public servant.”“While I deeply regret the unfair and misleading attacks on Susan Rice in recent weeks, her decision demonstrates the strength of her character, and an admirable commitment to rise above the politics of the moment to put our national interests first,” the president’s statement said.

At issue were her statements over what had precipitated the attack on the US mission in Benghazi. In a round of Sunday morning TV interviews five days after the Sept. 11 incident, she said it had resulted from spontaneous protests over an anti-Islamic video and was not a coordinated terrorist attack, possibly linked to Al Qaeda affiliates.In late November, Rice acknowledged that her initial explanation was partially inaccurate, but that did not mollify her critics. She met on Capitol Hill with Senator McCain and Sens. Lindsey Graham (R) of South Carolina and Kelly Ayotte (R) of New Hampshire, but they did not back down in their opposition to her potential nomination as secretary of State.

McCain slammed the handling of Benghazi as either a coverup or incompetence. Fox News also kept up the drumbeat of pressure with in-depth coverage. The suggestion was that the Obama administration did not want to acknowledge a successful terrorist attack – one that led to the first killing of a US ambassador since 1979 – at the height of the presidential campaign.

In his statement, Obama indicated that Rice will remain as UN ambassador, and lauded her service.“Already, she has secured international support for sanctions against Iran and North Korea, worked to protect the people of Libya, helped achieve an independent South Sudan, stood up for Israel’s security and legitimacy, and served as an advocate for UN reform and the human rights of all people,” Obama said.“I am grateful that Susan will continue to serve as our ambassador at the United Nations and a key member of my cabinet and national security team, carrying her work forward on all of these and other issues.”

Now all eyes turn to Sen. John Kerry (D) of Massachusetts, another top prospect for secretary of State. Senator Kerry is an experienced foreign-policy hand, and has long been thought to want the job. But having him leave the Senate could cost the Democrats his seat.Massachusetts’s other senator, Scott Brown (R), just lost reelection to Democratic firebrand Elizabeth Warren. But he remains popular in the Bay State and would be a strong candidate in a special election to replace Kerry. The Democrats don’t have an obvious choice – unless Gov. Deval Patrick (D) were to jump in.

Obama also must soon decide his nominee for another about-to-be-vacant post: secretary of Defense. News reports Thursday indicated that former US Sen. Chuck Hagel of Nebraska, a Republican, may have the edge to replace Leon Panetta, who has made clear his intention to step down.