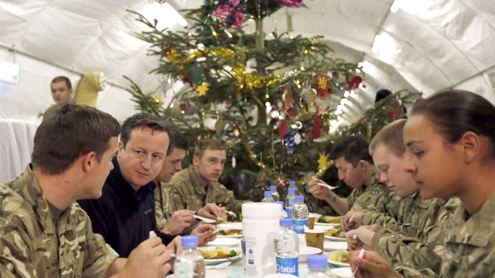 David Cameron attempted to rouse some festive spirit among British troops during a surprise pre-Christmas visit to Afghanistan yesterday.

The Prime Minister tucked into a turkey feast, played table football and sang carols alongside soldiers on the front line.And he insisted Britain is leaving a legacy of ‘success not failure’ in Afghanistan.The Prime Minister joined Royal Marines serving at Camp Price, a front line base in the district of Nahr-e-Saraj, last night.

Arriving after ministers outlined plans to withdraw nearly half of Britain’s forces next year, Mr Cameron insisted the handover to Afghan security forces was on track.Tomorrow the Prime Minister will travel on to the oil-rich Gulf state of Oman to seal a multi-billion pound sale of British fighter jets to its government.Acting as drum-beater for the British defence industry, he will oversee the £2.5bn deal for 12 Typhoon aircraft from BAE systems, which he said would safeguard thousands of jobs.

It is the second sale of Eurofighter typhoons to a Middle Eastern state after Saudia Arabia and will be seen as an attempt to build alliances in the region in the wake of the Arab Spring and nuclear threat from Iran.On Wednesday, the Prime Minister  announced 4,000 of Britain’s 9,000 troops in Afghanistan would be withdrawn within the year.Speaking at Camp Bastion, he said Afghan troops were growing in ‘capability’ to command the country and that Britain’s withdrawal was based on ‘good military reasons’.

‘The fact is they (the Afghans) are doing better than expected’, Mr Cameron said.‘This is withdrawal, this is draw down but based on success not on failure. We are confident it can be done while making sure Afghanistan does not go back to being a haven of terrorism, which is of course why we came here in the first place.’The Prime Minister viewed military vehicles which will shortly be sent back to the UK, before chatting over dinner with Royal Marines from 40 Commando – who make up around half of the British forces at the camp.

He then joined in a 40 minute service of prayers and carols in sub-zero temperatures.The pullout will be gathering pace next summer as military sources have warned the insurgency is likely to return with strength, leaving Afghan security forces to take the lead in combat operations.Mr Cameron said it was ‘still a deeply challenged country’ and British troops had paid a very price over the past decade. But said ‘it is a better place than when we came here in 2001’.

The ability of the Afghan forces to take on the Taliban has been questioned as a result of a series of ‘green on blue’ incidents which have seen Taliban sympathisers infiltrate the local security forces and murder British soldiers.But MoD officials have stressed that in two of the three districts that the UK are responsible for, Nadi Ali and Lashkhar Gah, Afghans are doing all the day-to day security work already, with British troops supporting them.Brigadier Bob Bruce, commanding 5,000 troops in the region said the capabilities of the Afghan security forces had ‘risen rapidly’ in the past 8 to 12 months.

He said: ‘They are in control and control is what every commander requires. It’s absolutely appropriate for them to be protecting their own people.’Before he arrived in Oman, the Prime Minister said: ‘Every country in the world has a right to self-defence and I’m determined to put Britain’s first-class defence industry at the forefront of this market, supporting 300,000 jobs across the country’, he said.The deal includes eight Hawk 128 aircraft also made by BAE. The government plan to sell more than 100 aircraft to the Gulf which would bring in £6bn for British firms.It is a boost for BAE, which employs thousands of people in its factories in Lancashire and the East Riding of Yorkshire,  since the collapse of a proposed merger with the firm EADS over the summer. – Dailymail