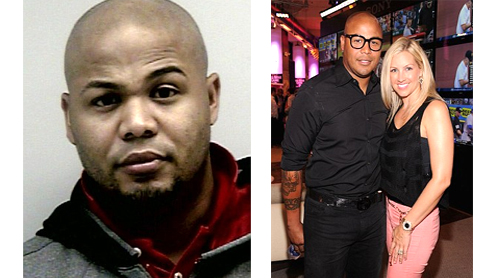 Baseball star Andruw Jones has been arrested for allegedly beating his wife on Christmas morning.

Jones, 35, was booked into the Gwinnett County jail outside Atlanta, Georgia, about 3.45am today on a charge of simple assault.Jones won the Golden Glove award ten times in a row between 1998 and 2007 for his performance in the outfield for the Atlanta Braves.He was released seven hours later on $2,400 bail.

Police were called to his home in the exclusive Sugarloaf Country Club in Duluth, Georgia, about 1.25am on Tuesday, according to the Gwinnett Daily Post.Officers were told that Jones and his wife of ten years Nicole Derick had been fighting.The couple have a son and daughter together.

Once one of the premier players in the big leagues, Jones broke into the majors with the Atlanta Braves in 1996 and won 10 consecutive Gold Gloves from 1998-07 as their center fielder.He has 434 career home runs over 17 seasons in the majors.Mostly recently, he played for the New York Yankees last season in 2012 and was released as a free agent.

Jones signed a $3.5 million, one-year contract with the Tohoku Rakuten Golden Eagles of Japan’s Pacific League earlier this month.In 2001, he testified in the prostitution case against an Atlanta strip club owner. While Jones was never charged, he said that he was invited to the Gold Club and that he was propositioned for sex by two strippers.He testified under oath that he had sex with both the women in front of the club’s owner and six other men. – Dailymail