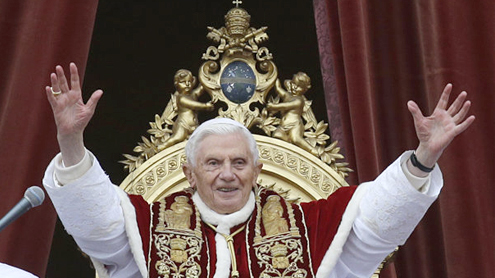 VATICAN CITY: In his Christmas message to the world Tuesday, Pope Benedict XVI called for an end to the slaughter in Syria and for more meaningful negotiations between Israelis and Palestinians, while encouraging more religious freedom under China’s new leaders.

Delivering the traditional speech from the central balcony of St. Peter’s Basilica, Benedict also encouraged Arab spring nations, especially Egypt, to build just and respectful societies.The pope prayed that China’s new leadership may “esteem the contribution of the religions, in respect for each other” to help build a “fraternal society for the benefit of that noble people.”

It was a clear reference to the Chinese government’s often harsh treatment of Catholics loyal to the pontiff instead of to the state-sanctioned church. Earlier this month, the Vatican refused to accept the decision by Chinese authorities to revoke the title of a Shanghai bishop, who had been appointed in a rare show of consensus between the Holy See and China.As the 85-year-old pontiff, bundled up in an ermine-trimmed red cape, gingerly stepped foot on the balcony, the pilgrims, tourists and Romans below backing St. Peter’s Square erupted in cheers.

Less than 12 hours earlier, Benedict had led a two-hour long Christmas Eve ceremony in the basilica. He sounded hoarse and looked weary as he read his Christmas message and then holiday greetings in 65 languages.In his “Urbi et Orbi” speech, which traditionally reviews world events and global challenges, Benedict prayed that “peace spring up for the people of Syria, deeply wounded and divided by a conflict that does not spare even the defenseless and reaps innocent victims.”

He called for easier access to help refugees and for “dialogue in the pursuit of a political solution to the conflict.”Benedict prayed that God “grant Israelis and Palestinians courage to end long years of conflict and division, and to embark resolutely on the path to negotiation.”Israel, backed by the United States, opposed the Palestinian statehood bid, saying it was a ploy to bypass negotiations, something the Palestinians deny. Talks stalled four years ago.

Senior Palestinian official Saeb Erekat said that in a meeting with the pope last week, Palestinian President Mahmoud Abbas “emphasized our total readiness to resume negotiations.” The Palestinians have not dropped their demand that Israel first stop settlement activities before returning to the negotiating table.Hours earlier, in the ancient Bethlehem church built over the site where tradition holds Jesus was born, candles illuminated the sacred site and the joyous sound of prayer filled its overflowing halls.

Overcast skies and a cold wind in the Holy Land didn’t dampen the spirits of worshippers in the biblical West Bank town. Bells pealed and long lines formed inside the fourth-century Church of the Nativity complex as Christian faithful waited to see the grotto that is Jesus’ traditional birthplace.Duncan Hardock, 24, a writer from MacLean, Virginia, traveled to Bethlehem from the republic of Georgia, where he had been teaching English. After passing through the separation barrier Israel built to ward off West Bank attackers, he walked to Bethlehem’s Manger Square where the church stands.

“I feel we got to see both sides of Bethlehem in a really short period of time,” Hardock said. “On our walk from the wall, we got to see the lonesome, closed side of Bethlehem … But the moment we got into town, we’re suddenly in the middle of the party.”Bethlehem lies 10 kilometers (6 miles) south of Jerusalem. Entry to the city is controlled by Israel, which occupied the West Bank in 1967.For those who couldn’t fit into the cavernous Bethlehem church, a loudspeaker outside broadcast the Christmas day service to hundreds of faithful in the square.

Their Palestinian hosts, who welcome this holiday as the high point of their city’s year, were especially joyous this season, proud of the United Nations’ recognition of an independent state of Palestine just last month.”From this holy place, I invite politicians and men of good will to work with determination for peace and reconciliation that encompasses Palestine and Israel in the midst of all the suffering in the Middle East,” said the top Roman Catholic cleric in the Holy Land, Latin Patriarch Fouad Twal in his annual address.

Back at the Vatican, Benedict offered encouragement to countries after the Arab spring of democracy protests. He had a special word for Egypt, “blessed by the childhood of Jesus.”Without citing the tumultuous politics and clashes in the region, he urged the North African region to build societies “founded on justice and respect for the dignity of every person.”Benedict prayed for the return of peace in Mali and harmony in Nigeria, where, he recalled “savage acts of terrorism continue to reap victims, particularly among Christians.”

The Vatican for decades has been worried about the well-being of its flock in China, who are loyal to the pope in defiance of the communist’s government support of an officially sponsored church, and relations between Beijing and the Holy See are often tense.Speaking about China’s newly installed regime leaders, Benedict expressed hope that “they will esteem the contribution of the religions, in respect for each other, in such a way that they can help to build a fraternal society for the benefit of that noble people and of the whole world.”

Acknowledging Latin America’s predominant Christian population, he urged government leaders to carry out commitments to development and to fighting organized crime.In Britain, the royal family was attending Christmas Day church services at St. Mary Magdelene Church on Queen Elizabeth II’s sprawling Sandringham estate, though there were a few notable absences. Prince William is spending the holiday with his pregnant wife Kate and his in-laws in the southern England village of Bucklebury, while Prince Harry is serving with British troops in Afghanistan.

Later Tuesday, the queen delivered her traditional, prerecorded Christmas message, which for the first time was broadcast in 3D.At Canterbury cathedral, Anglican leader Rowan Williams delivered his final Christmas day sermon as archbishop of Canterbury. He acknowledged how the church’s General Synod’s vote against allowing women to become bishops had cost credibility and said the faithful felt a “real sense of loss” over the decision.

In the U.S., the Rev. Jesse Jackson brought his message of anti-violence and gun control to a Chicago jail, using his traditional Christmas Day sermon at the facility to challenge inmates to help get guns off the streets.”We’ve all been grieving about the violence in Newtown, Connecticut, the last few days,” he told reporters after addressing inmates, referring to the Dec. 14 school shooting that killed 26 children and adults. “Most of those here today … have either shot somebody or been shot. We’re recruiting them to help us stop the flow of guns.”

In Newtown, well-wishers from around the U.S. showed up on Christmas morning to hang ornaments on a series of memorial Christmas trees while police officers from around Connecticut took extra shifts to direct traffic and patrol the town to give local police a day off. In a 24-hour vigil, volunteers watched over 26 candles that had been lit at midnight in honor of those slain at the Sandy Hook Elementary School.At a town hall memorial, Faith Leonard waved to people driving by and handed out Christmas cookies, children’s gifts and hugs to anyone who needed it.

“I guess my thought was if I could be here helping out maybe one person would be able to spend more time with their family or grieve in the way they needed to,” said Leonard, who drove to Newtown from Gilbert, Arizona, to volunteer on Christmas morning.At St. Rose of Lima Roman Catholic Church, which eight of the child victims of the massacre attended, the Rev. Robert Weiss told parishioners that “today is the day we begin everything all over again.””We know Christmas in a way we never ever thought we would know it,” he said. “We need a little Christmas and we’ve been given it.”

In a New York City neighborhood ravaged by Superstorm Sandy in late October, some holiday traditions had to go by the wayside, but Christmas was celebrated with a special sense of gratitude.Midmorning and noon Masses were packed Tuesday at St. Francis De Sales Church in the Rockaways; the church only recently got heat restored after Sandy flooded its basement. The bells and organ still don’t work, so St. Francis De Sales is making do with a keyboard for now.”But nobody is feeling morose or down. They’re just rebuilding their lives, keeping the faith and going forward,” choir member Ed Quinn said. “It’s not the best of circumstances, that’s for sure. But we’re making the best of it.” – Yahoonews