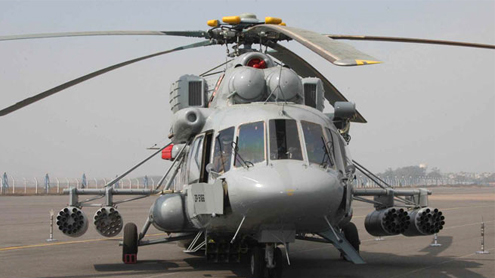 The full compliment of manpower has been posted and the initial 10 helicopters that will be deployed will arrive by Thursday. A squadron’s strength is 16-18 helicopters.“These choppers fall in the armed helicopter category, with substantial and effective firepower and with the latest and more powerful engines that will greatly enhance their payload carriage capability,”

the source said. The Mi-17V5 is an upgrade of the Mi-17 medium-lift helicopter. It is equipped with state-of-the-art avionics and navigation systems and weather radar and is compatible with the latest-generation night vision goggles.“With this, the helicopter can undertake all weather, day and night operations in any kind of terrain,” the source said.Phalodi, 200 km from the border, was home to an air maintenance unit and was upgraded to an airbase in 2010.

This is considered a step towards bridging the gap in air defences in the western sector as it is strategically located between Jaisalmer and Jodhpur, which are some 300 km apart.“Phalodi is strategically and operationally very important for the IAF. Being closer to the western border, it would give an edge to the Indian forces in terms of early warning about any misadventures from across the border in a conflict scenario. The connectivity to airbases in north, northwest and western India will have an added advantage,” the source said. – Nation