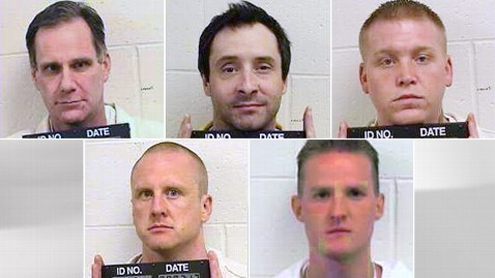 Five Idaho men who ended up in prison on charges ranging from manslaughter to drug possession say alcohol is to blame for their crimes, and now they want beer and wine companies to pay up.

The inmates at the Idaho State Correctional Institution south of Boise filed a lawsuit seeking $1billion in damages against eight of the world’s biggest beer and wine manufacturers, claiming that they should have been warned that the beverages can be addictive.The plaintiffs, identified by the Idaho Statesman as Keith Allen Brown, Steven J. Thompson, Woodrow J. Grant, Cory A. Baugh and Jeremy J. Brown, filed the lawsuit in Boise’s U.S. District Court December 10.The inmates say Miller Brewing Company, Anheuser-Busch, Adolph Coors, Brown-Furman, American Brands Inc, Pepsi-Cola, RJR Nabisco, Gallo’s Winery, Ernest Gallo and Julio Gallo Winery should put warning labels on their products to inform consumers that they are habit forming and addictive.

The five men don’t have an attorney, and the beer and wine companies have not responded to the lawsuit.Each of the incarcerated men said that he can trace his criminal history to the first sip of alcohol.Keith Brown was sentenced to 15 years in prison for shooting a man to death in Priest Lake, Idaho, five years ago, but he said he has been on the wrong path ever since he tried liquor as a young boy.  According to the inmate, as a result of his alcoholism, he has spent nearly 30 of his 52 years in lockup.

‘I have spent a great deal of that time in prison because of situations that have arose because of people being drunk, or because of situations in which alcohol played a major role,’ Brown wrote. ‘At no time in my life, prior to me becoming an alcoholic, was I ever informed that alcohol was habit forming and addictive.’Jeremy Brown, 34, is serving a 20-to-30 year sentence for a 2001 shooting that left a man seriously injured. The convict argued that he was drunk at the time of the incident, and if it weren’t for alcohol, the crime would have never happened.

‘I honestly do not think that anyone who is young and who is planning a future, if they knew that alcohol was addictive and habit-forming, would ever drink alcohol beverages,’ Brown wrote. ‘Not one day goes by that I do not crave alcohol. I dream about drinking alcohol, I sit around and crave alcohol.’Baugh, 34, was sentenced to three-to-seven years for grand theft and drug convictions, while Thompson, 44, has three more years to serve for similar crimes.Grant, who at 27 is the youngest of the five plaintiffs, is serving one-to-seven years for drug and aggravated battery charges.

‘I fear the day I am released from prison,’ Grant said in his statement. ‘I do not know if I can be a productive member of society and still control the desires and craving to use alcohol.’A statement in the lawsuit says the plaintiffs have ‘done actions which have caused them to become incarcerated for a great portion of their lives.‘The plaintiffs claim if they had not been addicted to the products sold by the defendants that they would have lead normal lives as productive members of society.’

According to legal experts, the inmates’ chances of collecting damages are dubious at best.Boise attorney Joe Filicetti told ABC News affiliate KIVI that alcohol addiction and its side effects are widely known even without warning labels.‘If you put these guys through depositions and you ask them “What do you know about alcohol?” I think it’s pretty common knowledge that it’s addictive,’ Filicetti told KIVI.

The lawyer added: ‘I think for everyone it’s axiomatic that alcohol is something that is something that is addictive and it’s something that lowers your inhibitions.’The inmates’ case is reminiscent of a lawsuit filed last February by an Indian tribe in South Dakota which accused beer manufactures and a liquor store of contributing to rampant alcoholism on the reservation.A judge dismissed the case in October, saying it addresses state law, not federal issues.Anheuser-Busch, the maker of Budweiser, released a statement in response to New York Times coverage of the tribal lawsuit, saying the company obeys all laws and doesn’t sell directly to retailers. – DailyTimes