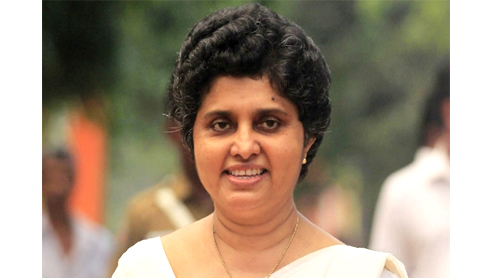 The move came despite mounting calls on Rajapakse to halt the impeachment which has been seen by rights groups and Western nations as a blow to judicial independence in a country emerging from decades of ethnic war.“The president this morning signed the letter removing Shirani Bandaranayake from the office of chief justice,” spokesman Mohan Samaranayake told AFP. “The letter was hand-delivered to her by a secretary accompanied by presidential security staff.”

Samaranayake said the president acted in line with the constitution to remove Bandaranayake, 54, following Friday’s overwhelming parliamentary vote to remove her.Legislators found her guilty of tampering with a case involving a company from which her sister had bought an apartment, of failing to declare dormant bank accounts, and of staying in office while her husband faced a bribery charge.Bandaranayake stormed out of a parliamentary select committee hearing last month after accusing ruling party legislators of verbally abusing her and not giving her a fair trial. She has denied all allegations against her.

The government moved to impeach her in November after a spate of supreme court decisions went against the government.Among others, she stalled a bill which sought to grant greater political and financial power to the president’s youngest brother Basil, who is the economic development minister.Privately-run newspapers in Sri Lanka on Sunday had urged Rajapakse to reconsider and avoid a constitutional crisis.

“In the coming week, what stands between possible constitutional anarchy and the rule of law is the intervention of the president,” the Sunday Times said in an editorial headlined: “The buck stops now with Mr. President.”The Sunday Island said the chief justice was not given a fair hearing and the impeachment has only “blackened” the country’s image.Work in courthouses has been at a standstill since Thursday as lawyers stayed away protesting the impeachment. They have also asked other judges not to recognise a replacement who is expected to be appointed by the president. – KahleejNews