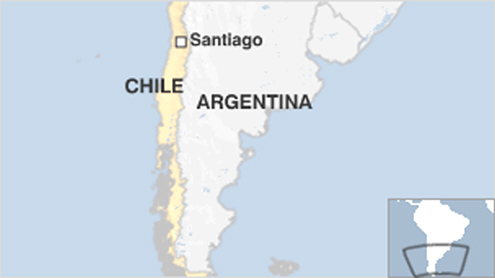 The drinking water in Chile’s capital, Santiago, is being restored after contamination left millions without supplies for a day, officials say.

The water company says supplies should be back to normal by Wednesday morning.The problem was reportedly caused by flash floods in the Andes, which muddied the river Maipo and forced the closure of water processing plants.More than two million people have been affected, with some businesses ordered to close for the day.The water processing plants have now been fixed, the Aguas Andinas company said.

Supplies should be restored in the city of nearly five million people by 06:00 local time (09:00 GMT).”We had an emergency event owing to circumstances beyond our control that forced us to cut water to 15 neighbourhoods,” said Cristian Esquivel, spokesman for Aguas Andinas.Officials have been distributing emergency supplies from tankers, with people rushing out to buy bottled water, says the BBC’s Gideon Long in Santiago.

The problem could hardly have come at a worse time, as this is the middle of the Chilean summer, when temperatures regularly top 30C (86F), our correspondent adds.Most offices, businesses like bars and restaurants, and playgrounds were closed because of the water shortage, reports say.Many people have complained that they were not given adequate warning. – BBC

Rita Ora Tries To Be Fashionable In Paris

Rita Ora Tries To Be Fashionable In Paris